I am an experienced developer but relatively new to blockchain development. There is a close source contract that I can interact with via the provider's web interface. The screenshot below is the receipt of one of the transactions.

If I can work out what the params are and inject my own data, how do I make a call to this contract from my own contract (in Solidity)?

Update: As pointed out by Alex's answer, the screenshot above is the event emitted by the contract, not the function call metadata. The new screenshot below is of the transaction overview with Input Data.

I'm now trying to figure out how to make a call to this payable function using the suggested code below:

In Remix, when I attempt to make a transaction, I get the following error: 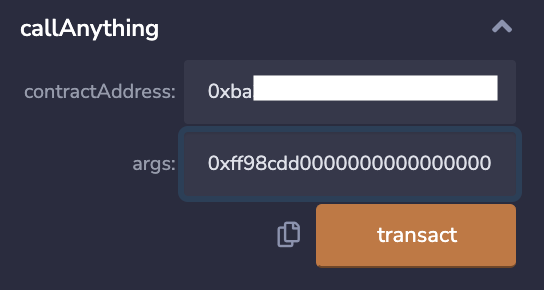 I have confirmed that the input data (args) is correct by attempting to make a transaction from the provider's web interface, then copy/paste the pre-signed data into Remix. I tried this on a test net with a custom callee contract and it worked fine.

Update: I tried to deploy a custom callee contract that disallows other contracts, the call returned the same error. I have came to a conclusion that the contract that I'm trying to interact with also blocks contracts.

You are viewing the logs for that transaction, which are data for the events emitted in response to a function call. Calling those doesn't do anything. If you have the etherscan page, what you should be looking for is the "Input Data" section in the "Overview" tab to see the actual method that was called and its input data (example in image).

From there, you can create a smart contract that calls those functions specifically OR one that arbitrarily interacts with functions by passing in the function signature and its arguments as bytes (it will look like the value of the Input Data field from the screenshot). Dummy code for accomplishing both is below:

You would have to build an interface for the contract you want to call, then interact with it through this interface. Just finding out what the functions should take as input and what they're expected to return should be enough for that.

Not the answer you're looking for? Browse other questions tagged solidity bytecode or ask your own question.