I don't understand why if i execute my function with web3.js i obtain this error in the transaction:

I read this other question about the same error. I don't understand why with this code its happening the same:

Do you use production blockchain? I'm working in Ropsten Test-net.

This contract can create a new Music contracts.

Screenshot of the metamask transactions without any problem: 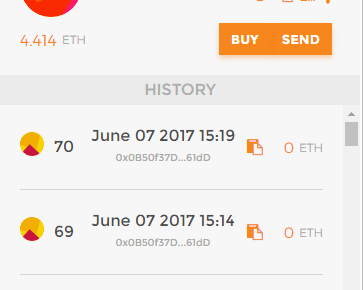 Screenshot of the EtherScan.io transaction with the error: 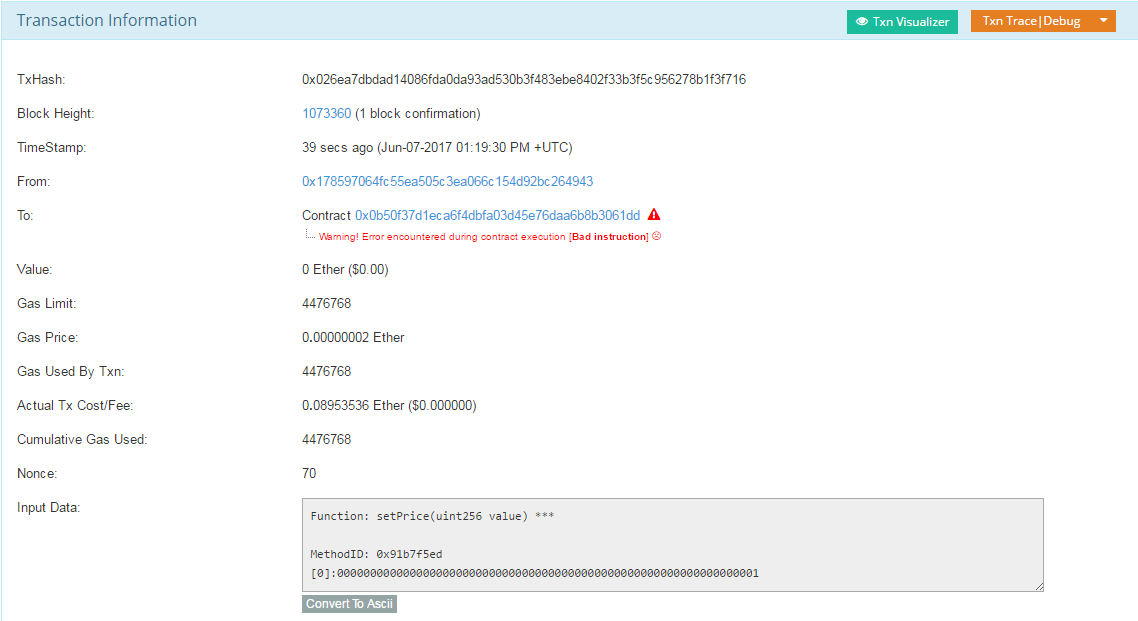 Update 1: I try using unsigned integers and bytes32 instead of int, the result is the same. Maybe the problem is in the modifier, could it be?

Update 2: I tried to delete the onlyOwnermodifier of the function and doesn't work ...

Update 3: I tried to delete all the modifier, is owned and onlyOwner and still doesn't working. I think the problem is with the builder function, i will starting now to make test with it...

Update 4: By doing Test, i know that moneyUpdate have the value correctly and money the same, but I have discovered that the value of money don't change. And I have discovered too that when i print the result variable of my callback inside "My Web3.js code" i obtain the adress of the transaction 0x0fda5d31d02c87aa20c45a54f6859c7576b4f0aae4a639c47ec23e5c4e‌​3d9953. In principle, the transaction is performed but the error prevents the change.

Some transactions (all are mine) for view the error:

The code is so obviously simple that the only problem would seem to be with onlyOwner. I would check the value of the owner variable. I bet it's not what you think it is. (It's either zero or the value of the sender who deployed the contract). You didn't provide the address of the contract, so I can't check the value of owner on Etherscan. Plus you're not providing the address of the calling account. If they don't match, the transaction will throw, which (as is true of all Ethereum errors) will report out of gas. If the code is really as simple as you say, the only possible problem is with owner. I would check that.

Your transaction appears to be failing because you're calling it from a different address than you created it with. I walked through the first transaction and noticed that it was skipping an equals test (ISZERO + JUMPI) when comparing against the caller. Sure enough, that transaction was sent from 0x178597064fc55ea505c3ea066c154d92bc264943, but the contract was created by 0xc2351205ee14cdb8b61ffc826ad1906bc7c08755

So, as Thomas posted, the problem is indeed due to the onlyOwner modifier.

It would be helpful to see the code for the owned contract from which yours is inheriting. I'd imagine it doesn't do much more than set owner to msg.sender, but there might be some additional complications in there.

In addition to more details that would be nice (How do you interact with the contract? What command do you use?), you need to add a constructor function to the contract. Also, try using unsigned integers instead of int.

I tested your code and it works fine (I've put the owned part to the same file). I used truffle with testrpc (I wrote and run a JS test). Maybe the problem is how you deploy/interact with your contract.

Side note: function needs to be payable when you send Ether by calling it (you want to receive Ether by function invocation). Here you don't send real money, you just set the value.

Not the answer you're looking for? Browse other questions tagged solidity contract-development transactions or ask your own question.