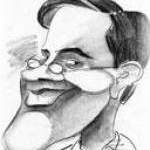 I started studying Electronics engineering in Sharif university at 1985, but one years later in 1986 I faced ZX-Spectrum computers in the high-school that I was teaching sometimes. That was a new world opened in front of me. I learned its Basic language and started to developing programs for it. Dooz game (6x6 tic-tac-toevariant) on ZX-Spectrum was the first game I produced that made me so pleasant.