How do I read an array inside of a struct?

as part of learning solidity and smart-contract development, I am developing a simple part management/tracking system. I have a struct and a mapping for a list of parts as such:

Everything is compiling without errors and I'm able to submit this transaction through Truffle. I get a transaction ID when I create new parts.

Now I'm trying to read the data inside of part but I don't see the array where I pushed the data. It seems that the last data in the object is the manufacturer. But it doesn't show that I've pushed the original manufacturer as owner of that part.

Have I not properly defined the array and pushed data to it? How can I read the data inside of that array? I need an array because this is an easy way to store owners for the parts since owners can change (i.e. defining a new owner by pushing new owner to the array for the specific part).

EDIT: It seems that if I define an array outside of a struct and public, I am able to read the value:

I don't think I can define variables in struct public or private so maybe that's why I'm unable to read that data? Could it be something with data access for arrays in Solidity?

You have to make a function to fetch the missing information. You have latitude. You could simply carry on with what I started and add the array, but I'm not a big fan of it due to scaling concerns and gas cost.

Those two functions let any observer establish the array length (so they don't walk off the end) and fetch whatever row they're interested in. Or, the client can iterate over all rows to get them all. It's worth noting that clients may already know about most of the owners if they have been watching event logs and events have been emitted each time an owner was added (should).

Was able to find an answer to my question. You can return strings as long as you use the memory keyword.

Likewise do the same for string arrays but need to also add a new pragma definition at the top of the source page to be able to do that. You will get warnings but no errors, I'm assuming this is because it's a new feature that will eventually be fully functional in Solidity.

Here's the test I ran in Remix. 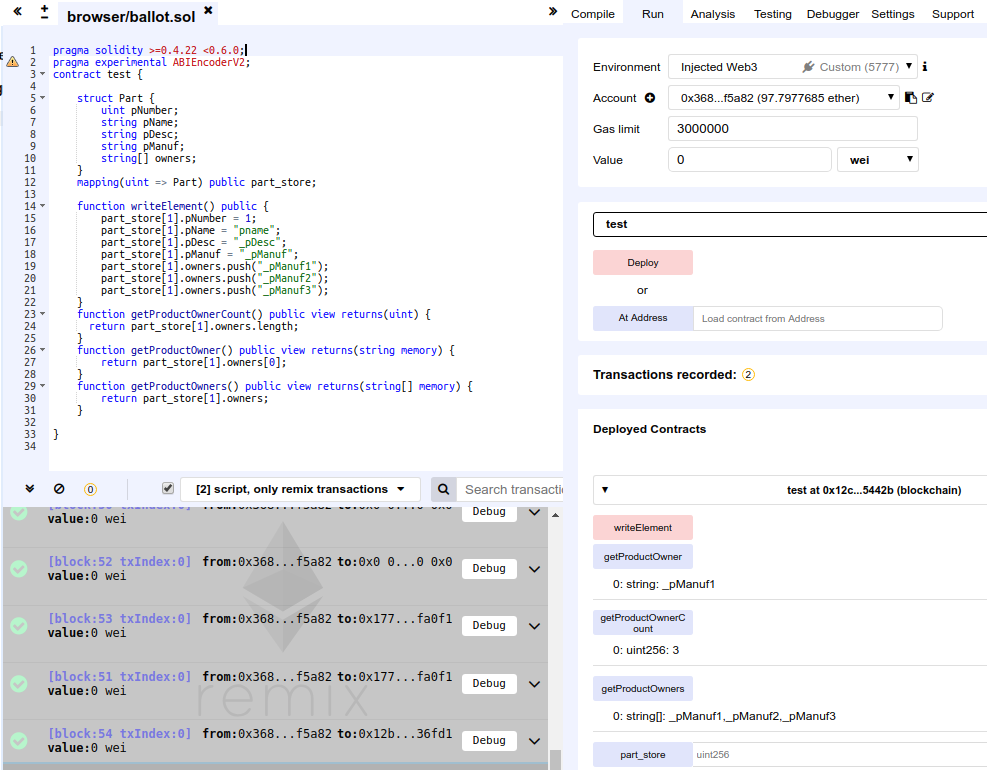 Not the answer you're looking for? Browse other questions tagged solidity truffle storage arrays mapping or ask your own question.

1
How do I define mapping in solidity where each value is array of Struct?
2
What is the right way to create a struct instance inside a function?
1
How do i add to a nested array within a struct
0
Vyper: Truffle test read mapping value inside struct
1
How to access nested struct values?
1
Array and mapping are not pointing to the same struct
0
Accessing array within struct in a mapping using web3.js
1
Array of mapping