Uniswap Approve Succeeded But No ETH Returned in "Swap"

I attempted to swap some eMax (using the Uniswap Swap feature) for ETH and the Approve went through, in the end I received another token (old version of token before hard fork).

It seems to be the correct token address, I seemed to have had enough ETH for gas, what happened here?

After further research after first posting this, I realized the token I received was an old version of the eMax token before a hard fork. I never purchased/traded this token. I just received the old token of eMax in this swap transaction. How is this even possible with Uniswap swap contract? "New eMax" for ETH and receive another token? Aren't the only possibilities here that I receive ETH or nothing if the transaction fails? 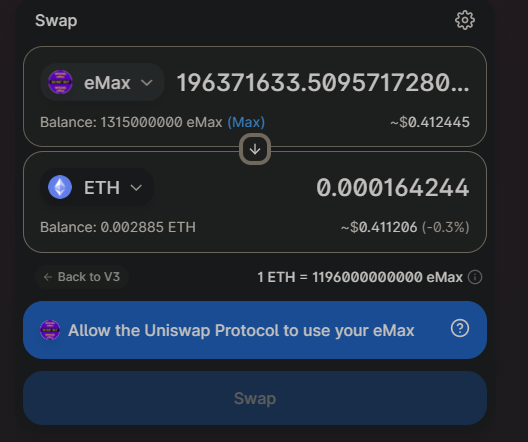 Did I do something wrong? Am I misunderstanding something? How can I prevent something like this in the future?

uniswap erc-20-approve failed-transaction
Share
Improve this question
edited May 29 at 2:11
eMax swapper
asked May 28 at 20:24

The transaction that you made is only the approve function. Basically, you are giving the permission to Uniswap to take eMax tokens from your account and do anything they want with it.

After that approval, you have to send the actual swap. Check the Uniswap interface again and the button should have changed from approve to swap. You only need to approve once per token. You do not need to approve when you are swaping Eth for a token, so that's why the Eth->eMax swap did not need an approval transaction first.

As for the fact that you have eMax tokens twice in your account, they are actually two completely different tokens that are both called eMax (this one, and that one). The owner of the eMax tokens sent you the tokens of the second eMax contract about a week after you purchased them with the first swap.

Not the answer you're looking for? Browse other questions tagged uniswap erc-20-approve failed-transaction or ask your own question.

20
How to infer token price from ethereum blockchain UniSwap data?
0
TRANSFER_FROM_FAILED error when trying to swap BCLNC tokens for ETH on Uniswap
1
Always get `Dai/insufficient-allowance` error
0
Uniswap Swap Token for ETH reverting
9
Why is it so expensive to trade on Uniswap with MetaMask? ($50 fee)
1
How did this address steal my Ethereum ERC-20 Tokens using Uniswap? 0x2b5b060d57b1333c9b2739e9c15b039726dd51ec
0
UniswapV2Router swapExactETHForTokens Fail with error 'EXPIRED' after deadline is reached
0
How to approve swapExactTokensForETH from UniSwapRouter V2, before invoking it?