How is uniswap/sushiswap distributing their fees?

As i know, Sushiswap is collecting a 0.3% fee that is then divided into two parts

note, 0.5% isn't indicated but I suppose that's the case after looking at code const BASE_FEE = new Percent(JSBI.BigInt(30), JSBI.BigInt(10000)) and 0.05% has to go somewhere, pancake is burning it for example

Now, As I mentioned above, the fee is defined in frontend code, JSBI.BigInt(30). But I can't find where are they splitting this 30 fee.

There is a code in the backend, a formula that is also stated in Uniswap whitepaper (v2), That might be doing job. They've mentioned 1/6 of growth in sqrt(k) that initially I didn't understand whats how is that related to formula or this fee distribution (yeh, I'm dumb at math things).

I know, I might be looking at big coincidence or just number play that might sound a bit stupid for experienced developer, but I will take a risk to ask - In code, Where is shushiswap or uniswap 0.3% fee is divided into LP providers and treasury.

Well, after some research I can answer my question. 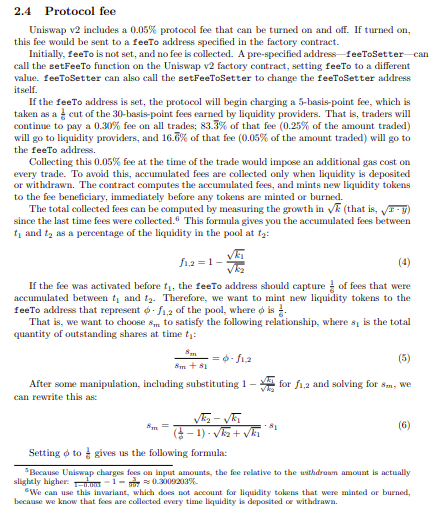 Precisely, the code for this formula is in the core repository:

And as I mentioned, the total fee is declared in the frontend code as a basis point (0.3%):

So, in the case of Uniswap:

0.3$ is a total fee, this multiplied by 1/6 is 0.05, their treasury fee. If this fee isn't on, LP providers are getting full 0.3%, so turning on the fee won't change anything for traders, they will still pay the same amount but in that case, LP providers will get only 0.25%

Not the answer you're looking for? Browse other questions tagged solidity uniswap decentralized-exchange sushiswap or ask your own question.

3
How does uniswap creator take profit?

2
Implementing AMM DEX similar to Uniswap/SushiSwap
2
How do gas fees work in UniSwap / other decentralized exchanges?
1
Uniswap/PancakeSwap Fork Fees
3
Calculation of swap amount needed for adding liquidity to Uniswap V2
1
How to make the basic DEX operations in SushiSwap in Solidity? (internals of SushiSwap)
0
Is there a grid trading option for Ethereum DEX'es like uniswap and sushiswap?
0
Prices from Uniswap and SushiSwap inconstistent
0
How to get Sushiswap and Uniswap prices from API for WETH/DAI on KOVAN?