where does function variables get created?

Where would test variable be created ? in memory or stack ?

The funny thing is from testing assembly, I can see that it's not in memory. I am just curious why ?

This is what I found on the internet. 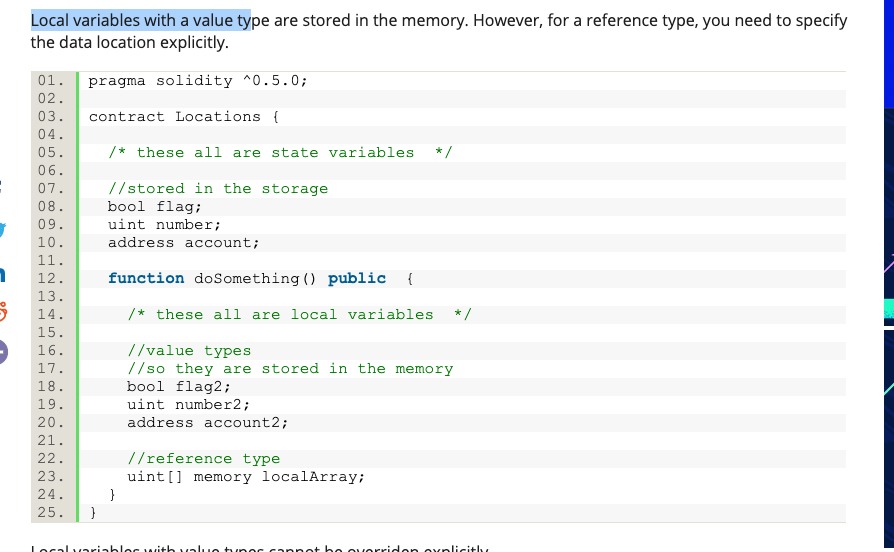 This description distinguishes between storage and non-storage.

It seems to be using 'memory' in order to refer to non-storage.

It's probably not the best choice of words, as the keyword memory is used in order to indicate that a given variable is allocated on the heap.

In other words, you have 3 data sections:

The description that you've found simply refers to all non-consistent data, regardless of its actual type, as data which resides memory and not in storage.

The decision of whether to allocate a variable on the stack or on the heap actually depends on whether that variable is of constant length (which is known during compilation) or not.

For example, the following variables are of constant length:

While the following variables are of non-constant length:

The usage of memory is required in order to tell the compiler that a given variable is not in storage, as the compiler assumes storage by default for certain types like arrays and structures.

Not the answer you're looking for? Browse other questions tagged solidity contract-development contract-design contract-deployment assembly or ask your own question.