Truffle test does nothing but compile work

I just started seeing solidity and truffle. I created a new project with the truffle init command and try this test code to verify the deployment of a contract.

But the truffle test command does nothing and the terminal stands still as if waiting for something. Instead truffle compile command works.

The anomaly occurs on both linux and windows. I also tried other test codes from the net or to write whatever, always the same result. Is it a bug?

Truffle version installed at the moment is the latest, 5.1.44

EDIT This is the folder structure created by truffle init.The Greeter contract is missing to fail the test. However, I also tried to add it and nothing changes. 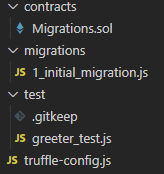 After quite some time, I realized that the problem was the nodejs version. Truffle is incompatible with nodejs 14, I downgraded to nodejs 12 and it works on all operating systems.

Not the answer you're looking for? Browse other questions tagged solidity truffle or ask your own question.

6
Return a mapping in Truffle test
0
Test pass with Remix but fails with Truffle
4
Truffle migration contract not found - but it's there!
2
mapping data is not returned from SmartContract during the first time add operation
0
Truffle compile and migrate not working
0
Enabling truffle compile optimizer does not change the deployment gas cost
0
address(this) in solidity is returning wrong contract address
0
Truffle Test Non responsive After Execution