Total newbie here. I am trying to get my blockchain synced again after the Geth Node issue of Sept. 18. I am stuck on block #2283419. I am running Mist 8.2 and Ethereum Wallet 8.2. Node connects but won't download. I am running Mac OSX 10.9.5 Ethereum blog mentioned a hotfix and I downloaded both files but blockchain still stalled on that block. I am not a programmer and have only basic computer skills. Please "dummy down" the answer for me. I do have my keystore file backed up just in case I need to resinstall programs. Thanks in advance. Bill

A new version of Ethereum Wallet 0.8.3 with geth 1.4.12 has been released at https://github.com/ethereum/mist/releases/tag/0.8.3, with the following message:

This Mist & Wallet 0.8.3 release contains the updated 1.4.12 Geth version. If you were experiencing issues with Mist crashing after block 2283416, then that's the likely culprit.

Just install the new .dmg file and your old version show be overwritten. 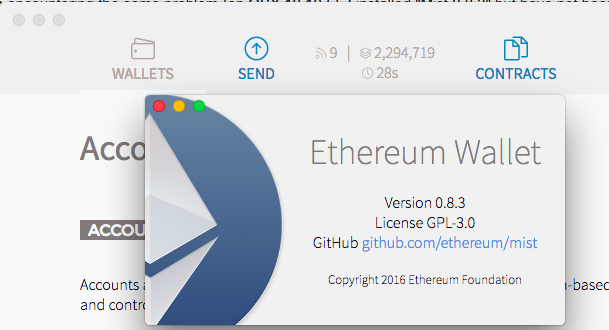 geth v1.4.12 is packaged with the Ethereum Wallet:

I also have geth v1.4.11 installed on another path. Ethereum Wallet will execute geth v1.4.12 from it's subdirectory (see above) if you have not already started geth from your command line.:

Check that you have the latest Ethereum Wallet and geth. You may have geth installed in several different place on your computer. If so, make sure your are running the 1.4.12 version and not an older version.

Note that currently geth 1.5 has the memory bug fixed 2 days ago - if you built geth 1.5 from source, you have to re-download the source code and rebuild it. If you installed it using the dev package, it is likely that this package has not been updated. Remove the dev package and try again.

To remove your old chaindata directory, see How to delete or reset the blockchain in geth? (OSX) .