Contract with mapping(address->bool) does not work as expected

I have a very simple Solidity contract:

Logic is simple: whenever I call grantAccess(...) method an address (passed as an method argument) has to be added to mapping with "true" value.

The problem is that this simple code does not work. After I send a transaction to execute grantAccess("0x.....") method, I call isAuthorized("0x....) method and it always returns "false". I've tried it with Chrome extension called "Sol" and with .NET Etherum API. The result is always same: isAuthorized(...) contract method returns "false" no matter what I do.

Here is how I call contact methods in Sol extension: 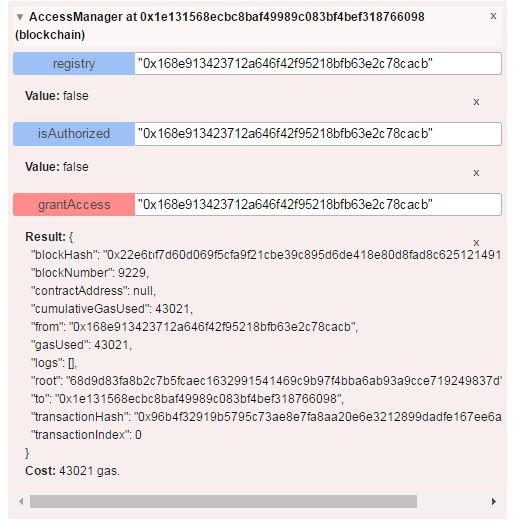 I think the problem is in passing string as an address argument but I have another contract where I do a similar thing and it works just fine.

Did somebody experience similar issues?

Did you run your code locally or in memory(VM) or into the blockchain? I tried your code it seems working (0=false before granting access and 1=true after)

Try to add an event to your grantaccess function;

As the comments that described the solution were moved to chat, and since that time already two people spent time on my (resolved) issue, I will write short summary of what happened as an answer.

Originally, my code contained event that was fired after grantAccess(...) contract method was called. As I never had any issues with "Sol" chrome extension, this gave me false impression that my changes were somehow rolled back after method execution was finished.

After @kobigurk tested my code in latest version of browser-solidity, it became obvious that the problem lies in "Sol" chrome extension and not in the contract itself. By some reason, "Sol" extension cannot correctly decode an answer received from the server and constantly shows default return value ("false" for bool type, "0" for uint). I tested same contract but with "uint" as return type from "grantAccess" method and always received "0". Which means that last byte is somehow ignored.

So, the solution is simple: clone latest "browser-solidity"s source code and use it instead of "Sol" chrome extension.

Thx everyone who spent time trying to help me!

Not the answer you're looking for? Browse other questions tagged solidity contract-development contract-invocation contract-debugging or ask your own question.