If a struct contains a single field, then that field is inaccessible from web3. In the below example, field uint b must also be present in order to access field uint c from web3. Of course, it's not the best use of structs if you're only storing a single field, but this unexpected behavior is also present in the more realistic scenario of using any number of additional array or mapping fields.

Workaround for now is to add unused dummy fields to my structs, but I'm wondering if this is expected behavior, and if this quirk is noted anywhere in the solidity documentation? I didn't find anything mentioned in the structs section.

You are in the vicinity of a known "gotcha" but the symptoms are not exactly like you report.

Here it is in Remix with uint b commented out, and present to show it works in both cases. 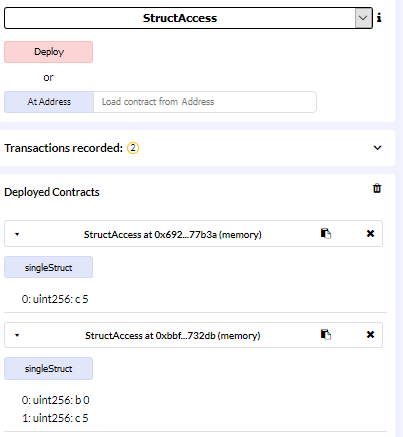 You will run into problems if both scaler variables are commented out. That would leave the struct with only indexed variables, the array and the mapping.

That situation is perfectly fine as a storage structure but note that the array and mapping are not included in the "free" getter provided by public. This reflects a limitation of the compiler. It doesn't know precisely how you would want the function constructed so it leaves them out. If there isn't at least one scaler variable, then that implies there would be nothing to return. Consequently, you cannot use public with a data structure that contains only indexed variables. More info: Compiler Issue or Improper State Variable declaration?

On the client side, since more than one value is returned in the case that uint b is uncommented, you will get an array instead of a scaler value. You should inspect singleStruct[0] and singleStruct[1] to see the two values. I haven't tested that, but hopefully, it nudges you in the right direction.

1
Correctly address Smart Contract storage address using web3js 1.0.0 library functions
0
How to define a dynamic struct "field"?
0
Is there any way to return multiple structs (or the fields from them) in Solidity when one of the struct fields is of type `bytes`?
1
Can I instantiate a struct with a member struct without supplying a member struct?
0
Access modifiers for properties of a struct
0
"Member not found or not visible" when trying to access individual struct members
0
Cheapest way to access and modify a struct
1
Access nested struct mapping member
0
Mapping of a struct missing field