I need to access some constant variables in a smart contract, but I'm not being able to. Here's my code:

'decimals' is a constant in a ERC20 contract deployed in Ropsten. I thought the compiler generated getters for those automatically, but I'm getting this error:

Is there another way to fetch a constant except from it's default getter? Note: The contract is already published and it don't have an explicit method to get the 'decimals' constant.

You can play with this in Remix to see it.

Here it is in Remix so you can see the getter working: 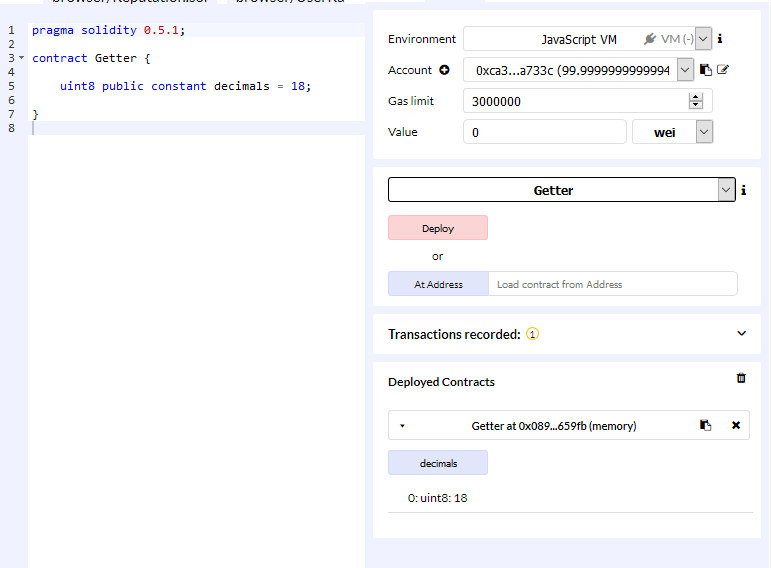 There may be a bug in your contract and that should be a concern. Another possibility is the way you instantiate the contract in JavaScript. I don't think it's possible to pinpoint the issue more precisely with the information we've got here.

Not the answer you're looking for? Browse other questions tagged solidity web3js or ask your own question.

17
Accessing past values of Smart Contract variables
4
Setting a struct once cause error while compiling: Stack too deep
3
Accessing public variables of smart contracts
6
This contract does not implement all functions and thus cannot be created
1
Unable to transfer ERC20 token from another smart contract to the person sending Ether
0
accessing global variables cost gas?
4
Accessing not public variables
2
Solidity Compiler won't upgrade
1
What are the accounts generated by Truffle and Ganache? How is the Truffle migration done exactly?
5
Why is an 'UNPREDICTABLE_GAS_LIMIT' error thrown when calling a view function created from a public variable?