Solidity 'out of gas' exception when trying to transfer Ether

I try to transfer Ether from the contract to an address but it gives the error that the transaction is out of gas. I think it's a small problem but I can't find it. I have to specifically use solidity version 0.4.24.

All methods will give the same out of gas exception. and the send and call method will also give a warning that it's outdated and that I should use the transfer method.

I also tried to adjust the gas and it didn't work, I also tried the needed 2,300 for the transfer listed on the docs.

Does anyone know what the problem is here?

Thank you for reading.

Not sure what you meant by

I have to specifically use solidity version 0.4.24

First, change ^0.4.24 to 0.4.24 without ^ to confirm you are not compiling with 0.5.x which would necessitate adding the keyword payable to the address declaration.

Second, confirm that contract has funds to send. The transfer draws from the contract's own balance so if the requested amount exceeds the funds on hand, the operation will fail. Your getBalance() function shows the current balance. It will initially be zero, so you have to send some ether to the contract in order to set up the test scenario.

Third, confirm the backing blockchain implementation is compatible with Solidity 0.4.24. The "backing" could be ganache, a private network with geth or a public testnet. In any case, the EVM version is a property of the network and you need a post-Byzantium EVM to run code compiled with 0.4.24 due to changes in the interface specification. A mismatch will cause this sort of trouble.

UPDATE (per comments below):

Your contract works fine, so I would be concentrate on testing methodology next.

You'll need more than 2,300 gas. Send much more to cover the rest of the operations (send itself forwards 2,300 gas to the receiver, the stipend, but this is not the budget for the whole shebang.)

You generally don't have to specify gas but estimateGas() isn't 100%. Consider specifying 100,000 gas to rule it out.

Here is the contract working in Remix to show that the issue may be client-side, i.e. how are you forming the request and sending it. 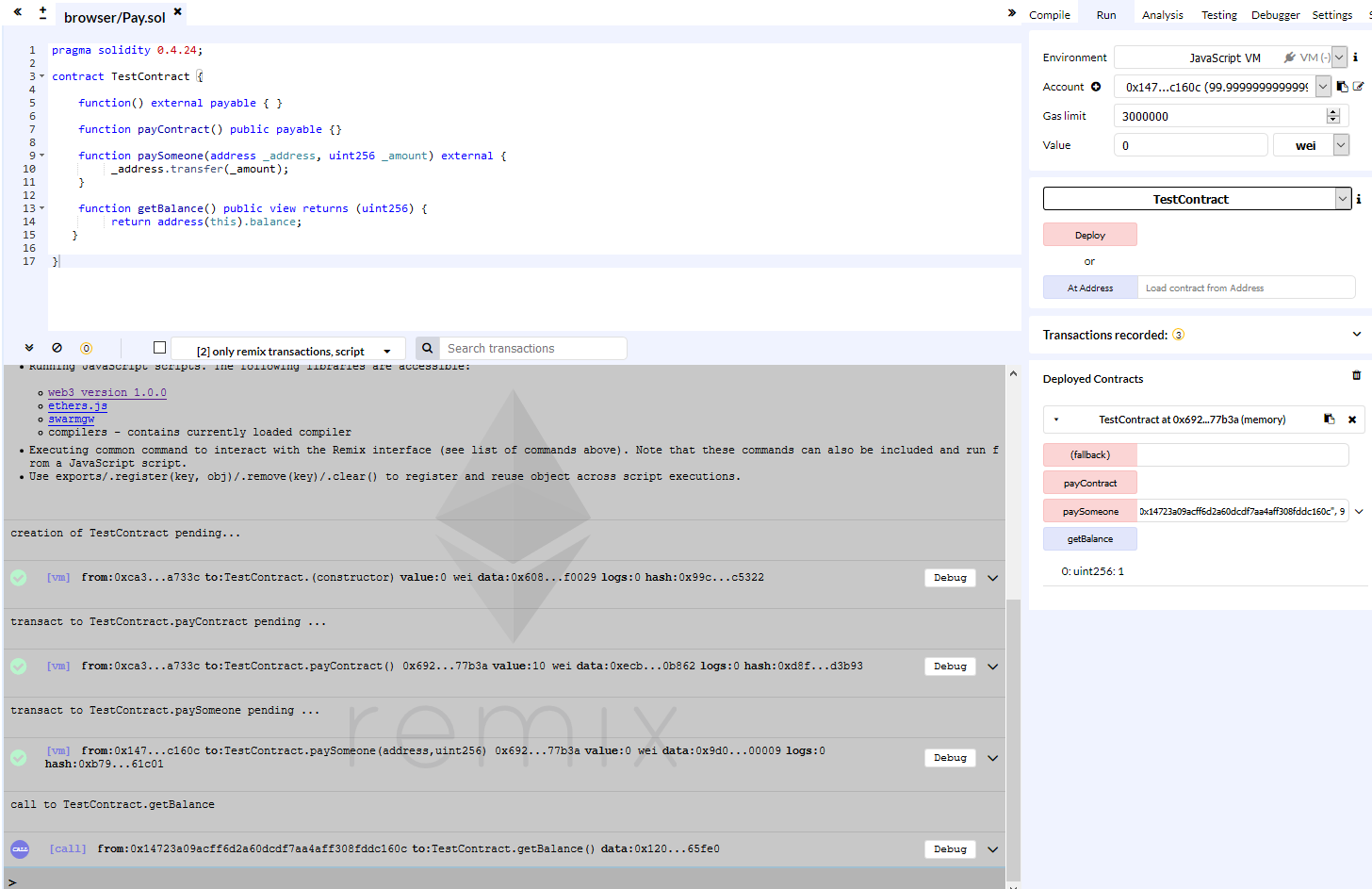 Not the answer you're looking for? Browse other questions tagged solidity ether or ask your own question.

5
<address>.transfer(amount) not working?
3
Transfer Ether from contract to user addresses
4
Remix Warning - No visibility specified, Violate Checks-Effects-Interaction pattern, Function state mutability can be restricted to pure - Can ignore?
0
A function declared payable is throwing a VMerror:revert in Remix
0
Transfer function not working in basic deposit and withdraw contract
0
How is gas adjusted for a transfer in solidity?
0
remix ERC223: This contract does not implement all functions and thus cannot be created
0
withdraw function does not work on ganache
0
Why token value is getting changed on Ethereum?
1
Solidity Smart Contract withdrawal ETH with amount from contract address does not work