How was the recursive call vulnerability attack conducted via proposal #59 when there were no Yes votes?

The mechanism for doing so is to create a split proposal. Split proposals take 7 days to 'mature' and get participants in. Any participants voting "yes" in the split will be given the right to call splitDAO.

splitDAO will create the DAO child contract if it doesn't exist, send the ether controlled by the splitters into the childDAO, pay out any accrued 'reward' pro-rata to the splitters, and return. At least, that's the plan.

And from DAO.report you can see that no one voted Yes to proposal #59: 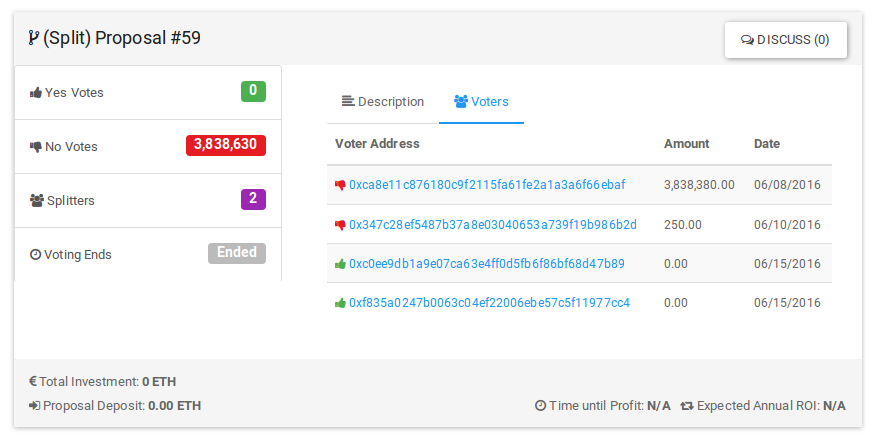 You can see the same information for proposal #59 in Which split proposal was used to mount the recursive call vulnerability attack on The DAO?.

From the source code for splitDAO(...) (from EtherScan.io - The DAO) there is a restriction !p.votedYes[msg.sender] that throws an error if the splitDAO(...) function call was called by a caller who has not voted Yes:

So, how was the attacker able to drain the ETH from The DAO when they did not vote Yes on proposal #59?

Was there another vector that was employed by the attacker?

User DTO in a DAOhub.org post How was the recursive call vulnerability attack conducted via proposal #59 when there were no Yes votes? pointed out:

There were two yes votes, just very low on tokens and are rounded down to zero:

But both accounts have 0 The DAO tokens - the tokens may have been transferred away:

So proposal #64 could be another attack vector? (But I don't know what has stopped the attack via proposal #59).

49
What is a recursive calling vulnerability?
7
How to withdraw Ether from The DAO?
8
Is there any way to determine how long it took for the DAO attacker to deploy the attack?
3
Which split proposal was used to mount the recursive call vulnerability attack on The DAO?

5
Can the stalker attack in TheDAO be stopped?
7
How can I list The DAO proposals and vote from the command line?
21
TheDAO hack FAQ: How did the attack happen on 17 June 2016?
3
Which split proposal was used to mount the recursive call vulnerability attack on The DAO?
3
Which accounts are involved in mounting the recursive call vulnerability attacks on The DAO?
6
What was the second vulnerability used in The DAO attack on 17 June 2016?
4
Did the spamming counter-attack on The DAO attack work to slow down the attacks?
1
Set curator of split in case of the 17 June 2016 attack
2
When will the Baddies have access to the hacked funds on the Ethereum Classic chain?
0
The DAO: Stalker Attack - Attacker split from childDAO?