What happens to a transaction after you clicked 'send' in Ethereum network?[Transaction life cycle at the EVM and P2P networking level]?

Ref: What happens when you type in an URL in the browser

So in a web browser, it's kinda easy to reason the life cycle of an HTTP request, how it moves down the network stack, reach the server, get a response and travel back up to my browser and gets rendered as a web page.

What happens when I type the following code in a geth console of a 2 node private Ethereum network(1 full pair node, 1 mining node)? Let's say we are running a light client.

EDIT 1: Let's assumming we are using POW. But since there is only one single mining node, POA is fine as well?

EDIT 2: In terms of performing the computation of the transaction(eg. 1+1), how do the mining node(say POA) and normal peer full node differ if they do differ?

EDIT 3: This articledid a great job at explaining on a higher level how a transaction get validated by all the nodes and only get "run" by the mining node, and after being included into the mining node, how a block get broadcasted and its transactions get further validated and propagated until the sender pickup the EVM logs. But how exactly EVM "crunch" the transactions and mutate the state? and how the p2p modules maintain all the nodes?

EDIT 4: this is another nice short read summarizing it as : construct->sign->broadcast->mine 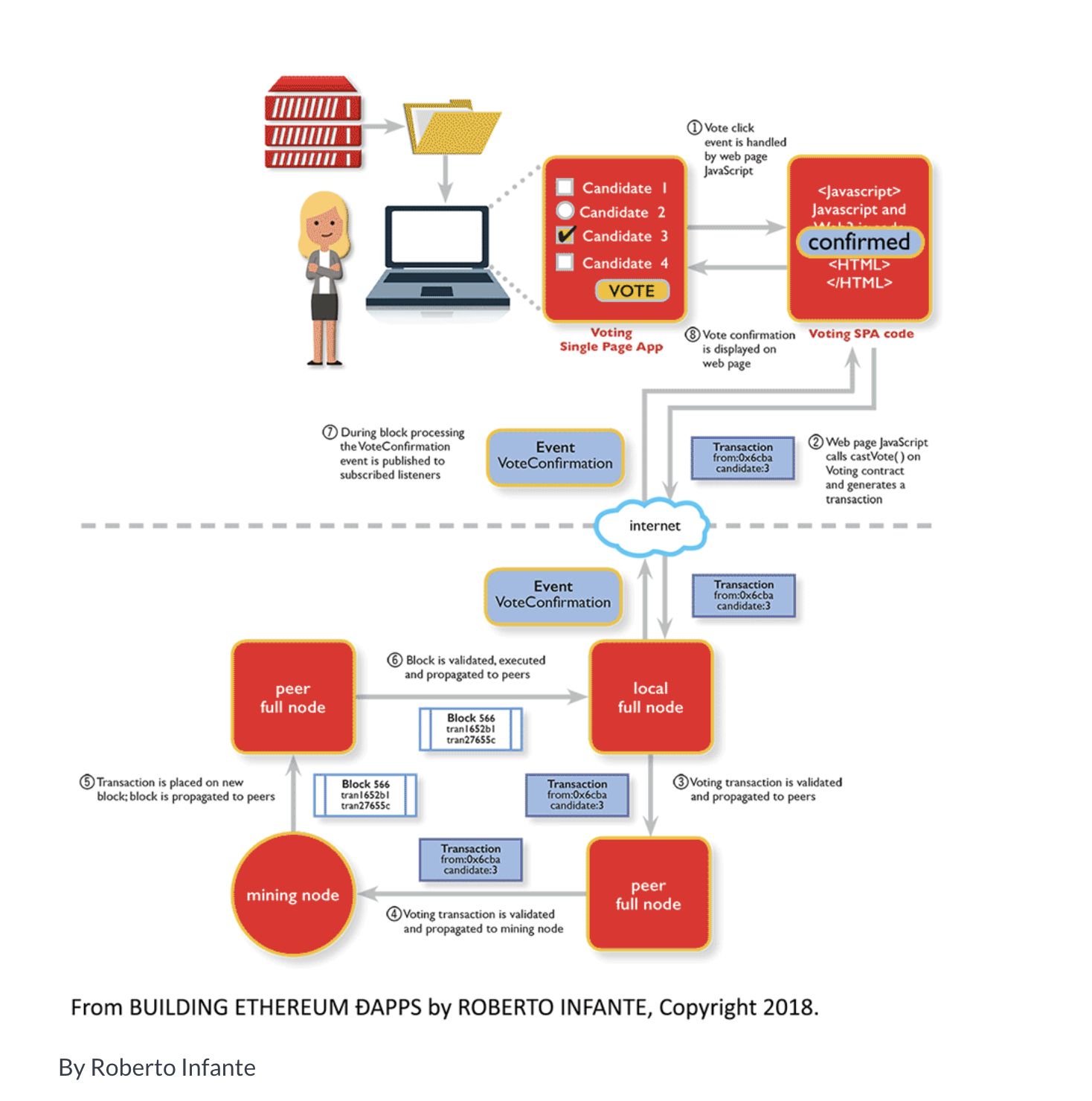 You're missing the mining process. You should really explore it for a better understanding.

Someone will mine a block. It could be PoA, POW, something else. It doesn't matter as long as all/both nodes can agree on block validity. Eventually, not simultaneously, all nodes will be made aware of the new block.

Blocks are well-ordered sets of transactions. So, both nodes will eventually agree on a transaction order. By extension, the nodes will agree on the state at each block height.

Transactions are processed in the order they appear in the mined blocks.

Not the answer you're looking for? Browse other questions tagged go-ethereum evm devp2p mastering-ethereum or ask your own question.

4
How to send transactions to a private network?
3
How does the EVM connect to all the blockchain nodes?
0
Latest block of multiple mining nodes
2
What is the purpose of non-mining sealer nodes in clique POA private ethereum network with respect to the clique consensus
1
Geth keeps changing coinbase / miner account and stops working. (POA Network)
0
What happens when you send a non-state-changing transaction to the transaction pool
0
How does a node execute the smart contract in the EVM and update the blockchain with result of contract execution