Reentrancy Attack in a Smart contract

I want to understand the concept of reentrancy attack in a smart contract. I know that a Malicious contract starts executing the code of another contract and this results in reentrancy attack. It can happen when in a contract a function receives ether. In this case a fallback function comes into play. But I can't understand how a contract gets control of another contract and recursively calls its functions like withdraw(). Kindly explain me this concept using the following two contracts, i got from a research paper:

What does the above call mean (particularly why it has two set of parenthesis?) and how it becomes recursive?

I am also showing the bank contract:

A computer program or subroutine is called reentrant if it can be interrupted in the middle of its execution and then safely be called again before its previous invocations complete execution. The interruption could be caused by an internal action such as a jump or call, or by an external action such as an interrupt or signal. Once the reentered invocation completes, the previous invocations will resume correct execution. And doing this with some piece of code will causes an Reentrancy Attack.

This line of code means, call the function Withdraw with argument balance such as Withdraw(balance) but also set the value of this function call as 0 which is done by value(0). So the in simple english we can say this line of code as:

There is a function in bank contract, named as Withdraw, set the value as 0, and pass the balance as function argument.

Let say the above line of code is as follows:

that mean, only set the value of function Withdraw as 0 but did not call.

Before going further to actual attack here, let me explain you a little bit about fallback functions in contract.

Now come to the actual attack. Your Malicious contract is actually an attacker contract, because it has a malicious fallback function.

this function is actually calling again to bank contract by withdraw function which is actually a line of attack.

Now see the MyBank contract which is innocent baby contract and does not know that outside world is so cruel and called the external function from withdraw function.

msg.sender.send(amount); this line is actually an external call to Malicious contract's fallback function before the execution of withdraw function completes. It becomes like this. 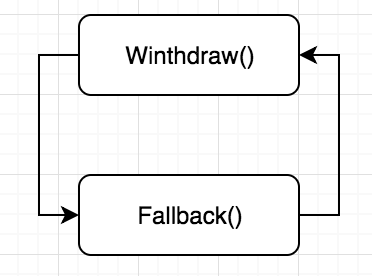 And this function calling will continue unless MyBank contract drain out of all it's ether (via gas or value). The recursive tree will look like this

I hope this answer will help you.

1
What causes re-entrancy attacks?
3
Why is "modifier lock()" needed in UniswapV2Pair smart contract?

1
newing up a new contract in solidity
6
This contract does not implement all functions and thus cannot be created
0
Transfer function not working in basic deposit and withdraw contract
2
How to transfer eth to a solidity function from a Dapp
1
What is the best option to return the eth to the sender?
0
withdraw function does not work on ganache
1
How to request tokens from msg.sender within contract function
0
Transaction Timing Implications for Reentry Attacks
2
Why function that does transfer without a mapping fails?