zk-SNARKs vs. Zk-STARKs vs. BulletProofs? (Updated)

If we can compare them,

Unlike zk-SNARKs that requires a trusted setup that creates an uncomfortable situation for it.

(2) Zcash using zk-SNARKs can hide amount address along with sender and recipient.

It is not yet clear to me if it is possible to hide sender and recipient by Bulletproofs and Zk-STARKs.

(4) Bulletproofs is shorter than zk-SNARKs and Zk-STARKs.

In general, what are the main differences (advantages and disadvantages) between these 3 main zero knowledge proofs techniques ?

Note: The references are used for the above comparisons:

Note 2: I compared zk-SNARKs vs. Zk-STARKs vs. BulletProofs in following figure. Any comment on this comparison is appreciated:

A few of your points are valid (e.g. SNARKs and STARKS are both faster than Bulletproofs) but there are also some mistakes:

What are the main differences (advantages and disadvantages)?

According to the awesome ZKP repo: 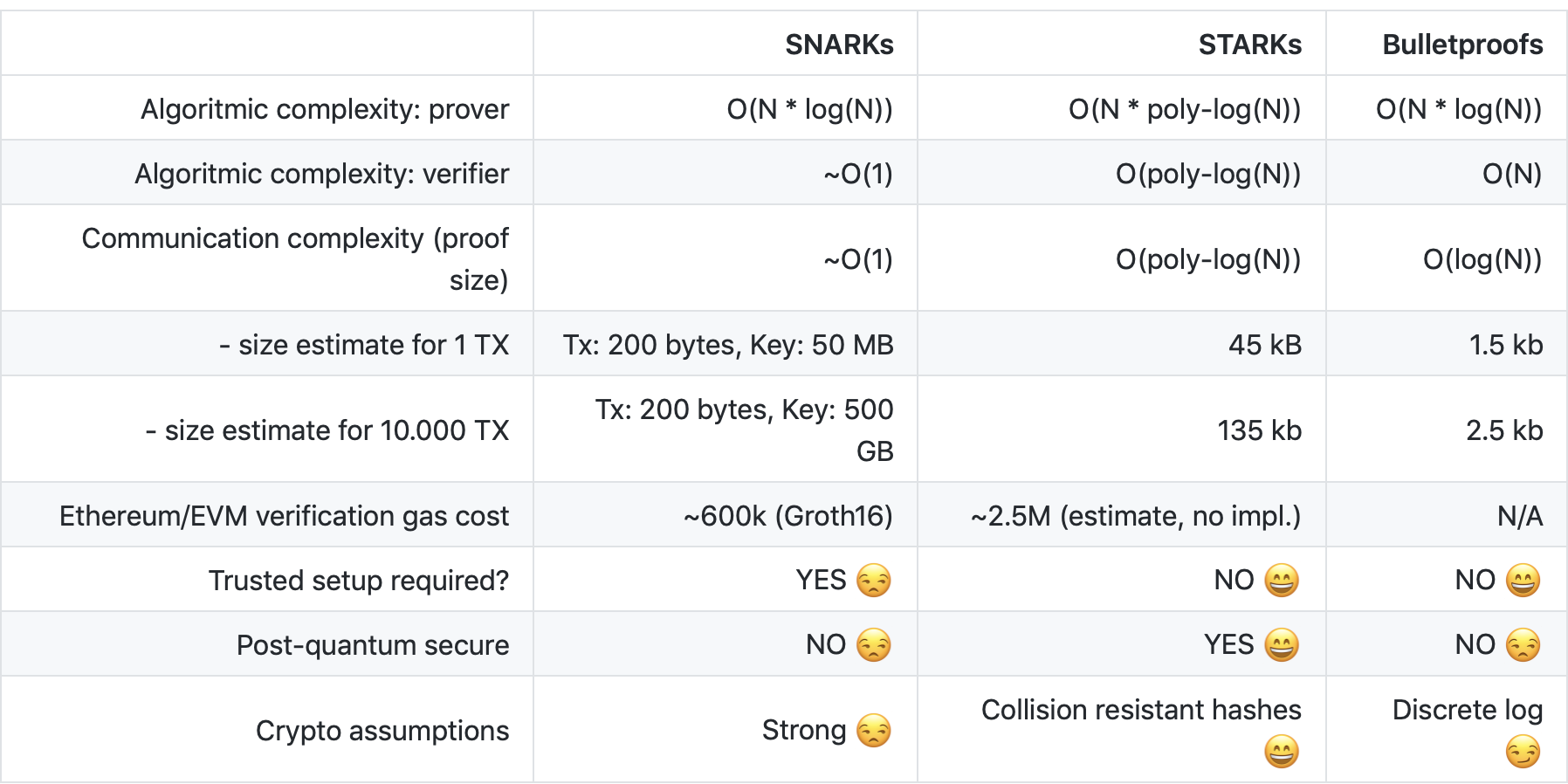 According to Elena Nadilinski's slides from Devcon4: 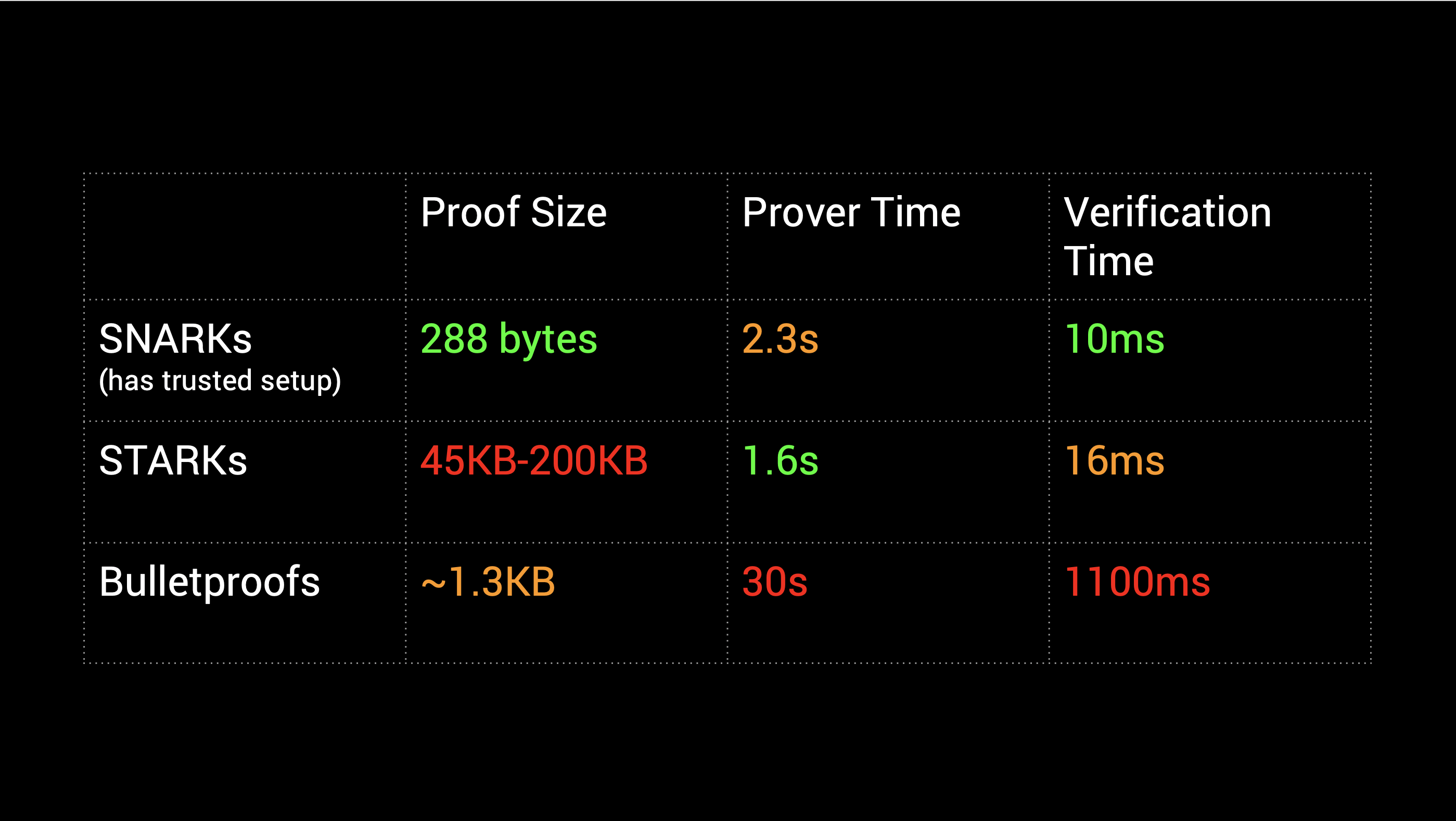 According to Zooko Wilcox's (Zcash) keynote from Devcon4: 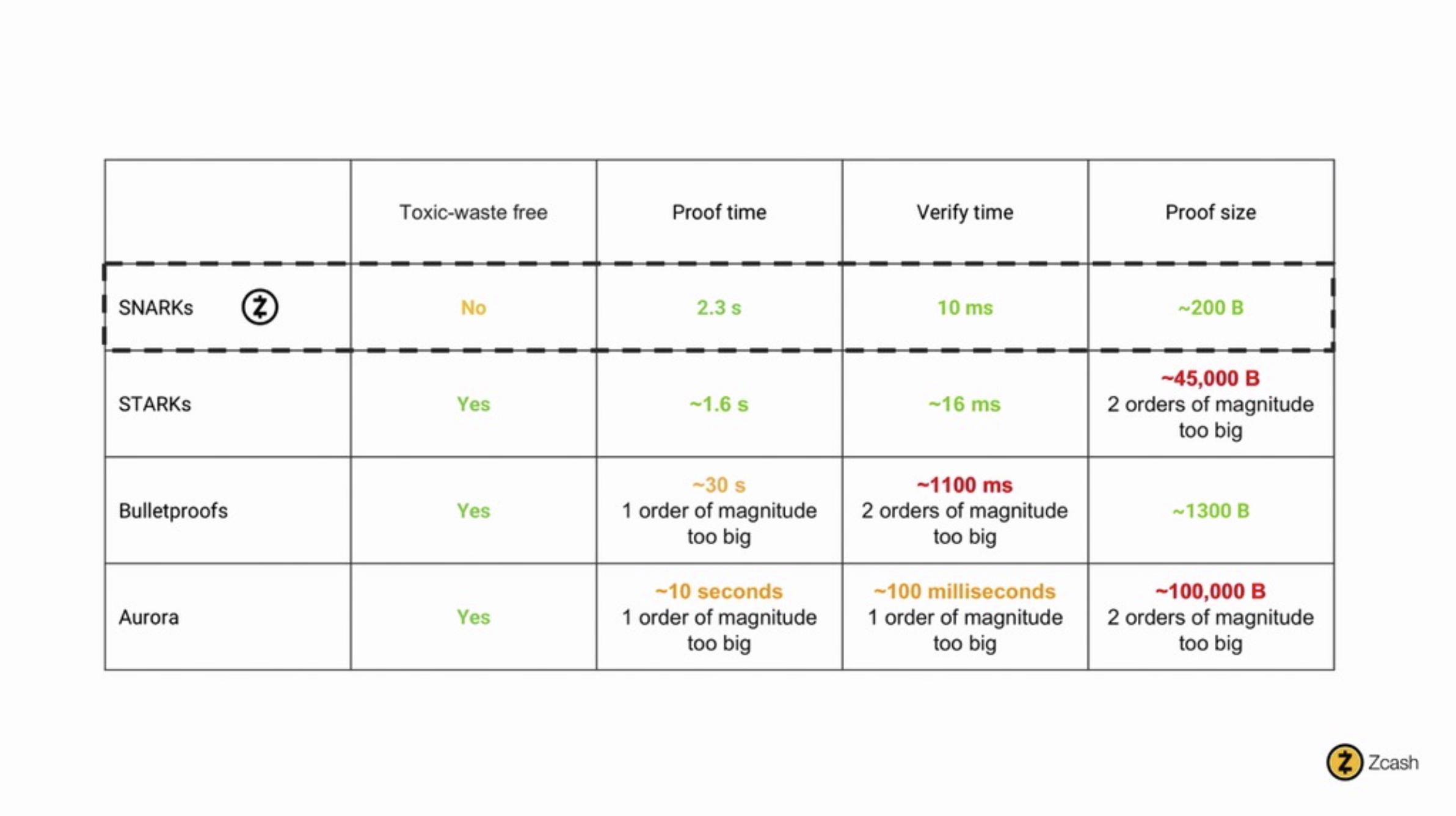 According to Eli-Ben Sasson's (STARKware) keynote at the Technion Summer School (do note that this last picture measures a subset-sum solver, probably more complex than the computations done in the comparison above): 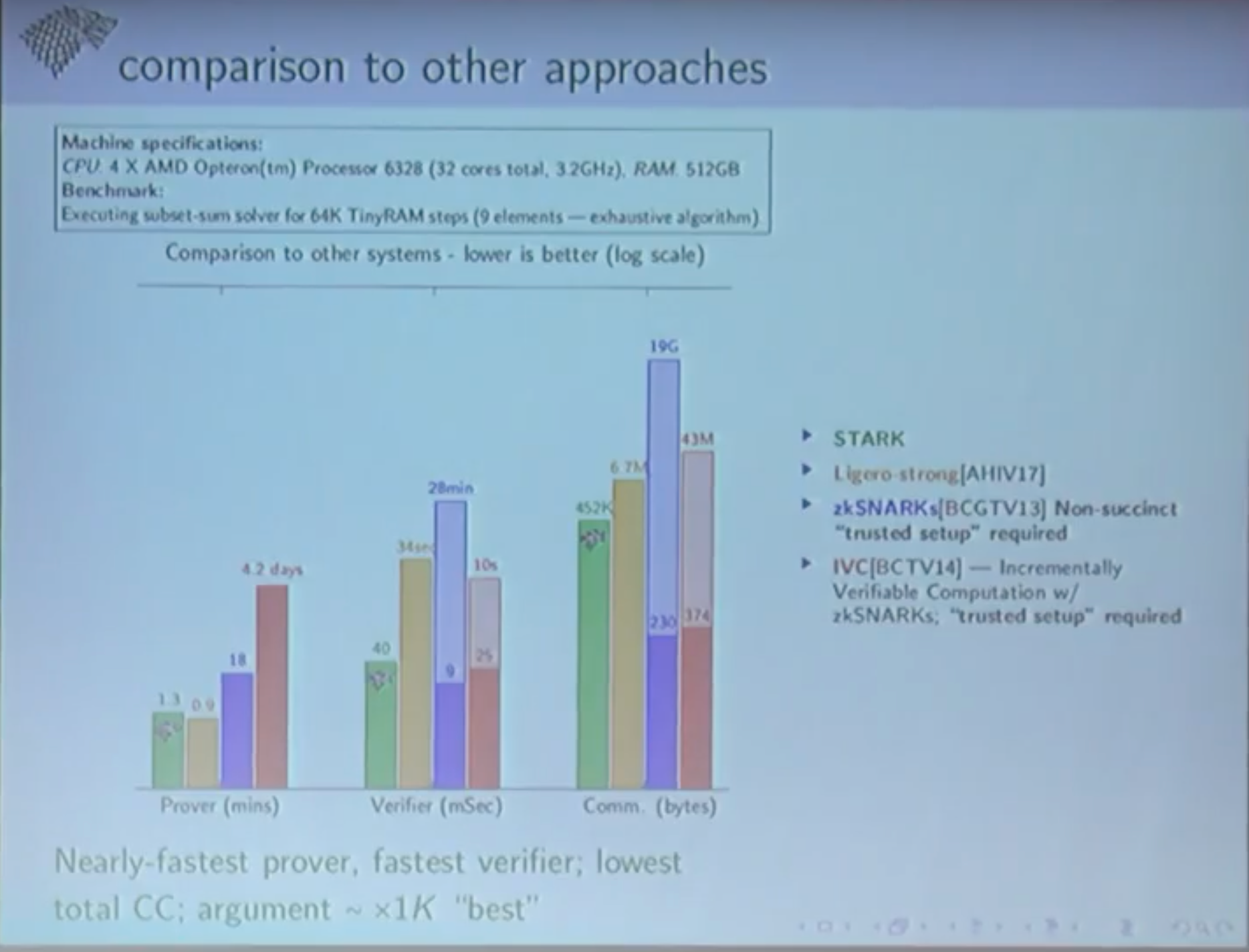 Starks are almost better than Snarks all around: they require weaker crypto assumptions, don't require a trusted setup and are post-quantum resistant. But they have a major drawback, as in the proof is huge.

For certain applications, like the one I have to work, that is simply not feasible. We had to choose between a Snark proof in the order of hundreds of bytes and a STARK proof in the hundreds of kilobytes. That single factor was a killer for us.

The time to verify is also remarkably larger in Starks than Snarks. In the former, it grows in time O(poly log n), whereas for Snarks it is linear in the input size, which is just a small constant, especially in complex circuits. Remember that n here is the number of gates.

For example, take a circuit that proves you know the pre-image of a certain hash value. The input will be the size of that input, which is 32 bytes if you're using SHA256. For this function, though, the number of gates will be in the tens of thousands, and you can see how the verification time for the SNARK is negligible in comparison.

The numbers in the tables above are very misleading. They don't tell you what sort of circuit you have, and how large n is. Depending on how complex your circuit is, they may vary wildly. I prefer to use asymptotic notation, and there is a good table for that in this paper (page 3).

AFAIK Bulletproofs are shorter but to verify them takes way longer then Starks thus making it non scalable for blockchain tx obscuring.

Not the answer you're looking for? Browse other questions tagged privacy zksnark zero-knowledge or ask your own question.

6
Updated: Is it possible to hide the sender or receiver of transactions by "zk-SNARK" or "Bulletproofs"?

9
What data will zk-SNARKs protect?
1
are the ERC721 smart contracts compatible with Zk-SNARKs?
5
Ethereum facilitation for zk-SNARKs
3
Difference between zero knowledge succint non interactive of knowledge proof (zk snarks) and zero knowledge range proofs (zkrp)
6
Updated: Is it possible to hide the sender or receiver of transactions by "zk-SNARK" or "Bulletproofs"?
1
ZK-SNARKS with ZoKrates - problems with proving the hash preimage tutorial
2
“Universal Proof of Work” with SNARKs?