Purpose of the function with the contract's name?

What is the purpose of the WithdrawalContract function in this case? If becomeRichest doing exactly same but with a certain condition and adding a pending withdrawal to the pendingWithdrawals. 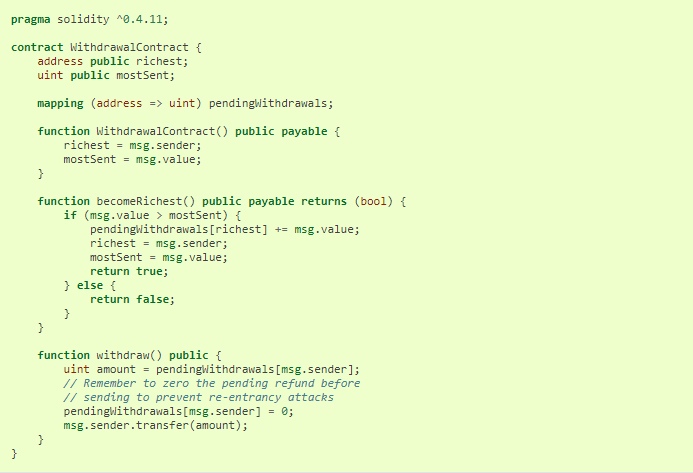 It's the constructor function. It only executes once, i.e. at the creation/ deployment time of the contract.

Here in this case, at the creation/ deployment of the contract, it sets the richest to be the one who is deploying the contract and the mostSent to be the value sent at the time of deploying.

You can read the documentation here for the latest version.

When a contract is created, its constructor (a function declared with the constructor keyword) is executed once.

And in the documentation here for the version 0.4.11 describes your case,

Contracts can be created “from outside” or from Solidity contracts. When a contract is created, its constructor (a function with the same name as the contract) is executed once.

This change has been introduced in the version 0.4.22 - as per the release notes here,

Constructors should now be defined using constructor(uint arg1, uint arg2) { ... } to make them stand out and avoid bugs when contracts are renamed but not their constructors.

Not the answer you're looking for? Browse other questions tagged solidity constructor or ask your own question.

1
Ownership isn't allocated in the contract?

2
duplicate function name with different signatures
3
assert() in nested function
3
what is more gas efficient? Looping through an array or storing the index?
0
Testing the fallback function with Truffle
1
What the sha3 function do with 2 parameters?
0
Gas estimation failed with the function
2
Can a function with the same name as the contract be declared both as a function and a constructor?
4
What is the purpose in asserting 'msg.data.length == 64 + 4'?