How would I explain Ethereum to a non-technical friend?

My explanation usually involves starting with a comparison to Bitcoin, but this quickly becomes complicated as I then have to explain the backstory of how the Bitcoin blockchain works, which is similarly technical in nature.

Is there a better way to describe the general concepts of Ethereum to non-techies? Are there any analogies I can make to things that are less technical in nature? Or is it just the case that the technology is quite complicated...?

Ethereum is a world computer [1] and might change how we interact, just like the internet did, 20 years ago. Like Bitcoin, it is based on a block chain, but Ethereum is more than just a currency. It is a platform for building decentralized apps (dapps), which can be used for any activity that has an economic or governance aspect, such as:

For more information, refer to here.

Ethereum explained to my mom

It depends on how technical your audience is, and you need to leave out a lot of subtleties, but I've been able to explain it to non-techie family and friends like so:

A Distributed System (the blockchain)

With most websites, information is stored on a server, which is basically just a computer with a database in it that has all of the site's information. If that computer is damaged, all the data and the website is gone. With blockchain technology, a database is distributed among a great number of people's computers, so that all information in the database is public and the database can't really be shut down as long as computers are still contributing to it.

Bitcoin and Ethereum are both cryptocurrencies whose ledgers are stored on a distributed blockchain database like this. The thing that makes Ethereum special, as opposed to other cryptocurrency that uses blockchain technology, is that you can actually execute code on the blockchain in this same distributed way. So now, instead of just using the blockchain as a glorified ledger, you can do something like specify conditions under which a person will be paid, and once those conditions are met the money will automatically go to the person without any outside interference (and in spite of anything that happens to one computer involved in the network). People call these chunks of code 'smart contracts', because it's code that represents an agreement that is able to enforce and execute itself.

If people have questions, you can delve into the details.

Just like teaching someone about a computer for the first time, there's no need to dive into the nitty gritty details. You just have to tell them what the system does! Here's one way I might describe blockchains and Ethereum in a few short, simple sentences:

Blockchains are a way for many different people or computers to agree on something even though they don't know or trust each other. By using special math and careful rules, everyone can agree on a list of the things that have happened. For example in Bitcoin people can agree on a list of all the payments that have been made, and they can use that list to know how much money everyone has at a given time. That type of money is called "cryptocurrency" or "digital currency" because the money is tracked by computer, just like your online banking.

Ethereum uses the same idea, but instead of just keeping track of payments, you keep track of computer programs. These computer programs can still be used to track money if you want. But they can also be used for many other things, like deciding whether someone is allowed to drive a car or who has won an election. At any given time, everyone knows exactly what the computer programs are doing, even if someone tries to lie and pretend something different is happening.

Because the rules are so secure and easy to follow, even simple devices like phones or locks can be programmed to obey what everyone has agreed to. And the way of doing this is strong enough that attackers or malfunctioning computers can't break the rules that have been set up. So people can feel secure using Ethereum for billions of dollars, controlling ownership of their cars and houses, or other valuable things without worrying that someone will be able to steal from them or cheat them.

It's hard to say what all Ethereum will be used for, because it can be used for anything you can write a computer program to do. But if there's a situation where you want to keep track of something, and it would be a problem if someone could hack or manipulate the results, it's a good bet that Ethereum can help! The results will look like regular websites or mobile apps, but will be completely uncheatable. As long as it's built right, not even the person who makes the app will have the power to break the rules they agreed to. And we think that's pretty cool!

The Ethereum Beginner's Guide from the blog.

1. Explanation for an absolute non-techy

Your non technical-friend would then, quite rightly, ask why would that be of any use? The answer is that such distributed computation turns out to be rather useful when two or more parties that do not directly mutually trust each other need to come to agreement on the result of a computation (such as how much funds do I have on my account). Traditionally, transactions between such parties required interactions through trusted third parties who relied on conventional compute devices and centralised trust.

2. Explanation for someone who has a basic understanding on how web services work

For a slightly more tech-savvy friend: we can look at Ethereum as a platform to build web services. At a very high level, it looks as illustrated below (right figure), in comparison to the traditional "trusted third party" (ACME corp) model shown on the left:

Below the hood, the two models (left = traditional/centralised, right = Ethereum/decentralised) look like this as illustrated below, with:

Most notably, observe how, in contrast to the traditional (centralised) model, ACME corp is no longer "at the centre of the universe" with all stakeholders dependent and reliant on it as a trust anchor. With the Ethereum approach, ACME corp is an arbitrary entity and your interactions with it are governed by the corresponding smart contract running on Ethereum.

[Figures are my original figures. Icons by thenounproject.com]

Most of the Internet is made of computers that are centralized: meaning they belong to one company or government.

The problem with this is when something happens to the one company, whether it is Facebook, Google, Apple, etc. then you either cannot talk to friends, do searches, and so on until the company is able to fix it. When something goes wrong or shuts down, the whole thing shuts down, and that is a weakness of the centralized Internet. 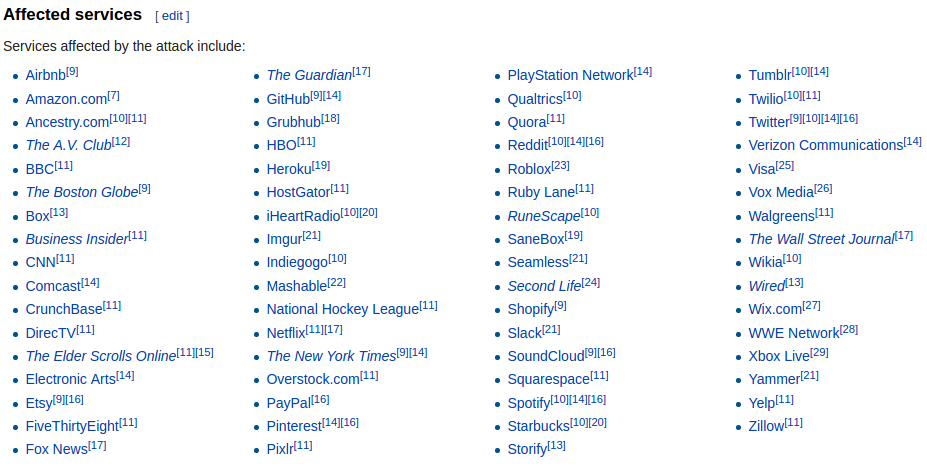 Now imagine an Internet that is made of everyone's computers. Imagine Facebook running this way, so that when some computers have a problem, there are many other computers on the network that will still be working and you can still use Facebook. The only way for the whole thing to shut down, is if literally every computer on the network did shut down.

This reliability, you can see, is an advantage of a decentralized Internet: there is no single point of failure.

Until Ethereum, the option to run in a decentralized way, did not exist. There are answers that explain more details about Ethereum, the blockchain, smart contracts, and so forth, but fundamentally Ethereum is significant because it adds a new dimension and paradigm to the Internet.

Note: This explanation focuses on the "non-technical friend", and is not trying to be technically accurate.

Ethereum is a global, public, cloud computer where programs have their own storage space that can't be modified by anything other than the program itself. That means each program establishes a set of rules that can't ever be changed, so we can build applications where you don't have to trust people not to cheat you—they can't cheat you. You can remove the trusted middleman from pretty much any system that used to require one. That is a significant fraction of our economy. It's a significant fraction of our society.

My friend used to say "If Bitcoin is to cut banks, Ethereum is to cut laws."

Allow me to be more elaborate:

If Bitcoin is to cut banks from the flow of money, Ethereum is built to cut middle-men and centralized power from any other processes.

It allows the same piece of software to run on everybody's computer, and enables those computers to act like middle-men.

For example, Uber now acts like a middle-man for rider and driver. Every ride request and dispatch run thru their server, and they control all the info. With Ethereum, we write the software that handles ride request and dispatch, and let it run on everybody's computer, and these computers form a network. This network will handle all the requests and dispatches. But since this network is formed by everybody's computer, there is not centralized power like a company to control the process of ride sharing.

Ethereum is a very broad programming platform where a developer can build games, financial applications, gambling apps, create insurance companies, social networks, and pretty much everything we already use today. However, Ethereum is run off a decentralized system which means there is no main authority holding all the information that’s used to create those applications.

Taken from www.ethereum.net. They have some great remedial explanations of "the basics". Plus some good analogies.

To be fast and put a bit of drama:

Maybe one of the last opportunities that the world has in order to be totally free, and win the battle against banks, corruptness, and the overextended control they have above us. :P

2
Ethereum elevator pitch
1
is it really helpful? how will it change the world?
22
This image claims you can build "decentralized apps", and each computer "contributes a little to process it". Is that claim correct?
15
What are the risks associated with using Ethereum?
8
Will Ethereum be the Internet 2.0?
7
What is DeFi decentralized finance?
2
Why do crypto-currency ventures pivot towards serving banks and what is Ethereum's approach?
1
Can someone help me get started on the Ethereum platform like all the basics?
2
Is every Ethereum user already familiar with Bitcoin?
0
Why does the "Find a wallet" section of Ethereum.org not list one single actual program?
See more linked questions

9
Could somebody please explain in detail what this Ethereum contract is doing?
2
Would Ethereum have lower transaction fees with the same usage as Bitcoin?
3
How to use a contract deployed by my friend on my private blockchain?
0
Bitcoin and other non-ethereum coins on EtherDelta Exchnage?
1
can anyone explain how this works mapping(string =&gt; Asset) private assetStore;?
0
What is the authorization for any technical central action in Ethereum system?