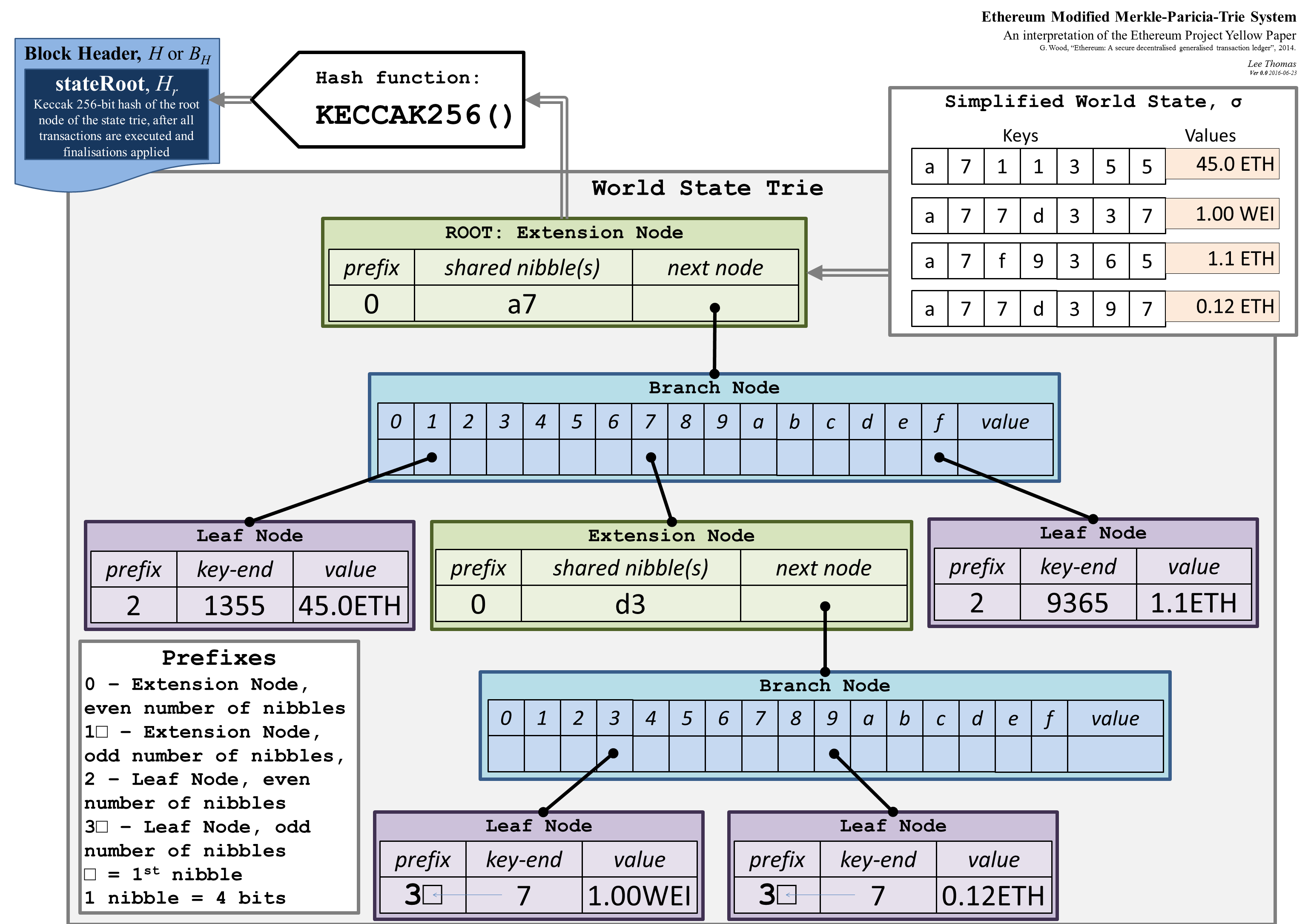 I do not have time to look through the source code right now. My questions is: In Ethereum, when is the decision to replace part of a given path with an Extension-node made?

I suppose the sole idea of extension nodes is to limit the number of situations where leaf nodes would share the same sequence of nibbles.

Would you describe the algorithm in short? I have two ideas in mind

2)I've gone with a different approach and I construct the trie using largest blocks and divide when required. In this approach, I guess, when adding a new node to the trie, I would need to runforth down each branch of the sub-trie just to check if it is worth it to put an extension node just below the current branch and remember the (1-branch-N-Leafs set) which needs to be added to it. Is this the case with Ethereum? Looking forward to your reply and in the meantime, I'll implement this scenario. I am not sure if this approach would produce the optimal result when compared to the offline-second-pass-with-compression method.

So the question holds - when does the Ethereum's Trie construction algorithm decides to combine two or more paths into one extension.

Whenever a new item is added to the trie the algorithm can decide whether to insert a branch, a leaf or an extension. Let's say you need to insert 3 key-value pairs:

After "0x01" is inserted the trie will look like this (hash0 is root):

Generally, while inserting a key-value pair:

When deleting a key-value pair:

I most likely missed a few cases but I hope the general idea is clear. When adding/deleting key-value pairs the algorithm can make the decision locally at the current node, there is no need to create an unpacked version of the trie first and then pack it.

Not sure if every implementation has their own way of doing it, but the way it's done in the geth client implementation resembles your approach in 2). Basically, an extension node is created any time a given path in the trie would contain one or more successive branch nodes with only a single child node. The extension node replaces these branch node(s) (conceptually, not in practice). This can be easily detected before creating the branch nodes by looking at the key of the to-be-inserted leaf node. To clarify:

Suppose you have a trie consisting of 4 nodes, A, B, C and D:

Letters are nodes, numbers are indices of branch nodes

A is an extension node, B is a branch node and C,D are value nodes.

I will show keys in decimal format to make reading easier. It is also important to distinguish between two different keys. One is the accumulated key of a value node which is the entire key that defines the path to it. In an Ethereum transaction for example, it would be the transaction index. Keys are chopped up into nibbles. And then there's the (let's call it) node key, which is the key contained inside a value node or extension node. This key will be a subsection of the corresponding accumulated key. Also, since the keys are chopped up into nibbles, each branch node can have 16 (2^4) children.

I won't outline the full recursive algorithm with all possibilities (Find it here), but in our case the following happens, starting at the root node:

The new trie is:

F is an extension node, B,G are branch nodes, C,D,E are value nodes. Their node keys are:

I know this doesn't cover all cases but I hope this helps, for further info about the Ethereum trie see:

0
how to calculate root hash in MPT?