Does ether transfer consume all gas in case of exception?

If addr.transfer() fails, does it use a revert- or throw-style exception? In other words, does a failed transfer consume all provided gas?

I believe that it won't consume all of the gas provided.

Whilst as per the documentation it will throw:

Since the "REVERT instruction" EIP it looks like not all of the gas is consumed anymore.

To test this, I created some simple contracts - that can be seen on this EthFiddle.

I deployed the contracts using remix and called the forward function of my Transfer contract and despite the transaction using Remix's default of 3,000,000 gas the actual gas cost was 29,135:

Debugging the transaction, and looking at the stack, I can see that the reasonably recently added REVERT OPCODE was called: 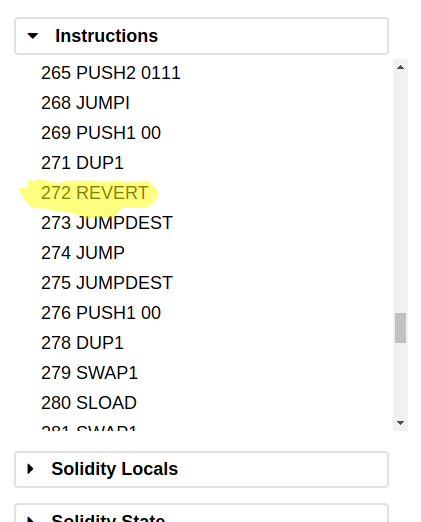 Which I believe accounts for not all of the gas being consumed.

Yes, when address.transfer() fails it throws an exception and reverts any state changes.

Edit to clarify my original answer

Not the answer you're looking for? Browse other questions tagged exceptions address.transfer revert-opcode or ask your own question.

27
Is it a good practice to log an event every time I throw in Solidity?
3
How to catch out of gas exception
4
Will existing contracts behave differently when REVERT is implemented by Metropolis?
6
Will revert() refund all gas of the transaction or just the remaining gas?
10
How to map EVM trace to contract source?
38
How do I detect a failed transaction after the Byzantium fork as the REVERT opcode does not consume all gas?
0
Opcode for out of gas inside a message call
1
Web3 transaction to a contract fails with revert. Same transaction works from truffle console
0
Is it safe to call revert() instead of returning a value?