Last call to make your voice heard! Our 2022 Developer Survey closes in less than a week. Take survey.

I'm trying to follow the instructions on this blog to get a private Ethereum network running on my Windows machine. https://btcblockchain.wordpress.com/2017/09/27/how-to-run-private-ethereum-blockchain-on-windows/ Maybe later I'll try Docker in the future, but for now I just want to follow this blog. This example requires having two chain in two different folders; I ran the command to setup the genesis.json on each, and that ran fine.

I've seen variations of this issue on this site, but usually with Mist wallet.

My directories are slightly different from that blog, so these are the two commands I ran.

This is still running in a command window when I try the second one below.

I don't understand why it's complaining about port 30303 when I specified 30302. I've seen other samples where people use --port as well, so not sure why this sample had just one dash in front of the word "port".

There is no ipc file in any of the node1 subdirectories.

Note: I was running Parity Wallet on the production node at the same time. I killed those processes, and got same error. 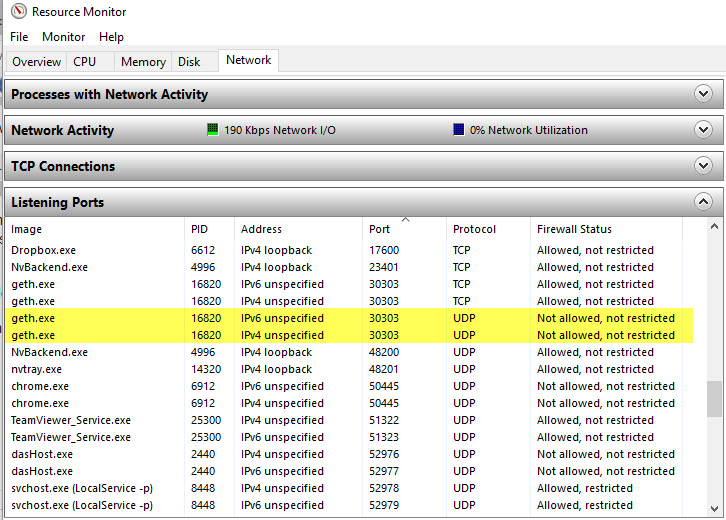 Solved. I believe there was a web formatting/copy-paste problem with the double-dashes. The two dashes were being treated as a slightly different character. I replaced with double-dashes and now both nodes running.

Apparently datadir works fine with one dash or the other character. I'm using a tool called "cmdr" as well. When changing the copy/paste dash and typing a real dash, I saw the character shape was actually different, as shown here:

. So most likely, my port overrides were being totally ignored. And now in Resource Manager I see geth.exe using 30301 and 30302.

Not the answer you're looking for? Browse other questions tagged go-ethereum windows or ask your own question.