what does the "12 confirmations" mean in the mist when sending transactions?

The number of confirmations is the number of new blocks built over the block that your transaction was inserted into.

As an example using the main Ethereum blockchain, the following image shows a transaction included in block 1436475. This image was taken when the highest block number was 1436476. This transaction has been confirmed in 2 blocks 1436475 and 1436476. 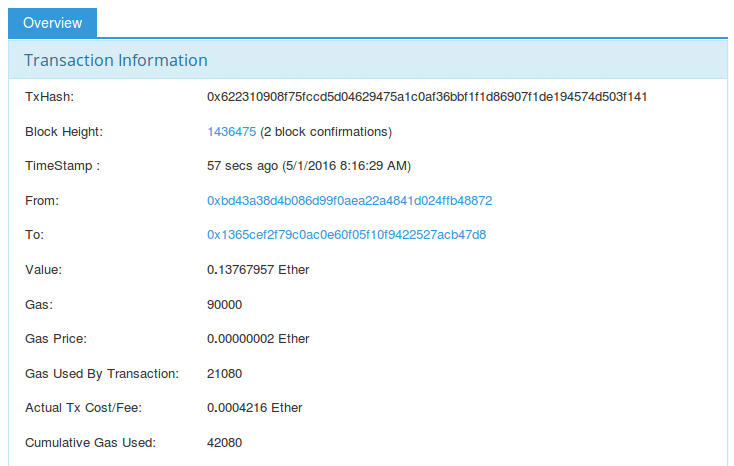 Not the answer you're looking for? Browse other questions tagged mist or ask your own question.

0
What is miner Mining?
94
What is an uncle/ommer block?
5
What is the longest fork that had occurred so far?

26
What does "intrinsic gas too low" mean?
4
How can I cancel a not yet pushed transaction in Mist?
4
All transactions sent from Mist failing
0
When Mining on Testnet do I need to Sync again?
0
Mist - Rinkeby Test Net - No Longer Sending Confirmations
0
Does connecting Mist/Ethereum Wallet to parity update chaindata for geth?
0
When creating an account with the Mist wallet, is the password a key for encrypting my wallet file or is it for something else?