How do I compare the “scalability” capabilities between ethereum and bitcoin?

I'm trying to assess how they can be compared. Bitcoin can process 7 trans/sec, is there some equivalent on the Ethereum side? How should I think about this and what quantitative info should I use?

Let me try to explain.

The Bitcoin side is pretty simple to understand. The bitcoin blockchain has a hardcoded block size limit of 1 MiB. With an average transaction size of around 600 B and a target block time of 10 minutes, you get

which translates down to

Here we are at around 3 transactions per second in practice, however, if you reduce the average transaction size, it's possible in theory to reach higher rates, maybe 7 transactions per second? That said, there is nothing that scales in Bitcoin unless the network finds consensus on a solution to increase the blocksize or any other scalability fix.

Ethereum introduces a new concept which has no transaction or block size limit but a gas limit. Gas is a unit which basicly calculates fee costs. Every transaction, every contract execution and every data storage operation on the blockchain costs gas. Every block has a block gas limit of default 4,712,388 gas which can be spent on every block.

Let's assume an average transaction size of 21,000 gas per transaction which is required for a default value transfer and a target block time of 15 seconds, we have by default the following:

which translates down to

So, at the current level of gas block limit and block time, there is a default possible throughput of 15 transactions per second. If you increase the required gas per transaction, it's probably a little bit lower.

But since you asked about scalability, the yellow paper specifies in equations 44-46 how the block gas limit scales: 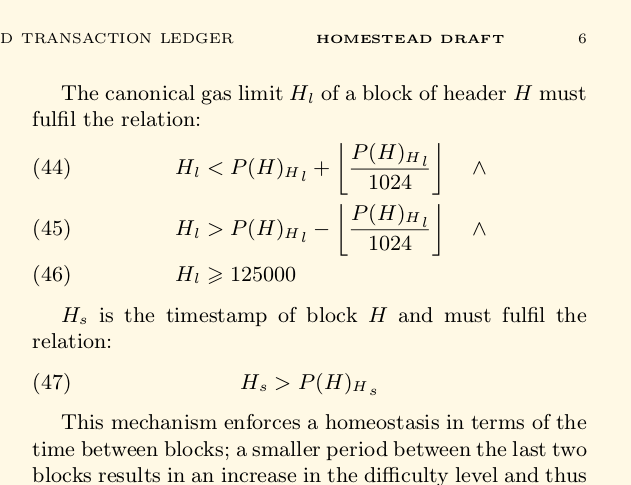 Which basicly means the block gas limit can increase by 1+1/1024 each block, or:

which is a scalability factor for 276 per day. Ethereum scales indefinitely. In theory, in practice, the early olympic testnet was able to stress the network to levels at around 25 transactions per second. And this is only the status quo. See also this post about transaction size.

Not the answer you're looking for? Browse other questions tagged bitcoin scalability or ask your own question.

48
Is there a limit for transaction size?
27
How many transactions can the network handle?
3
Does gas price increase under heavy load?

22
How does Ethereum deal with blockchain scalability?
4
Why doesn't Ethereum do double hashing like Bitcoin?
20
Can I use the same private key for Ethereum and Bitcoin?
0
Difference between ethereum private network and bitcoin network
5
Convert a Bitcoin private key into an Ethereum address
3
Ethereum scalability and user wait time
14
What the difference between Bitcoin and Ethereum private/public keys and address?
5
Differences/similarities of “Bitcoin script” and “Ethereum smart contract”?
0
What are differences between Bitcoin and Ethereum transactions?