How fast should be an internet connection to mine ethereum and don't have connection issues? What about ping?

And, how many GB of data would get downloaded over a month period? I have a 250GB limit.

I'm currently on a ~ 10 Mbits/s download and 1 Mbits/s upload line and it is fast enough to mine the Ethereum blockchain while performing my usual Internet usage, including videos.

In the daily chart below, the average data transfer rate seems to be between 200 and 358 Kbits/s.

My ping time to the pool I'm currently mining with is between 359 - 432 seconds in a short test.


And, how many GB of data would get downloaded over a month period?

Note - my estimates below are based on the raw bytes received and transmitted by my Ethernet networking cards on my mining computers and will include other traffic travelling within my internal network. It should be an over-estimate that will give you an upper limit. 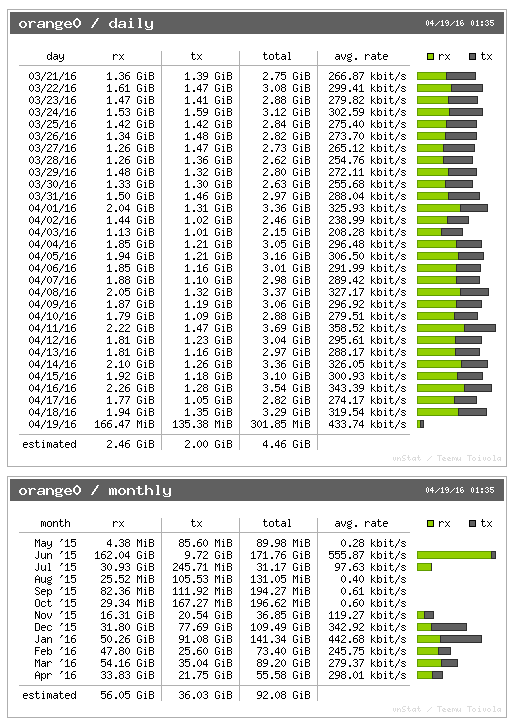 In the chart above, the daily traffic of 2.46 GiB received and 2.00 GiB transmitted would be a good representative of my Ethereum network traffic consisting of traffic from an instance of the geth blockchain node software and 2 instances of the ethminer mining software. My ethminer mining software has mainly been mining solo, but sometimes is pointed to mining with a pool.

In the monthly chart, the months of December 2015 to March 2016 would be representative of the Ethereum network traffic.

My monthly estimate from the charts above would be between 32 to 54 GiB downloads and between 25 and 91 GiB uploads, with the total transfers between 73 and 141 GiB.

As requested by @gatb27, here is an update of my miner's network traffic. Note that my firewall reporting stopped sometime in October 2016, so the charts only display the data until then.

Not the answer you're looking for? Browse other questions tagged mining ether network or ask your own question.

3
What are the bandwidth requirements to run a full node?
39
Is CPU mining even worth the Ether?
4
Is there any software apart from Geth and Mist that offers the Javascript console? I want to use the console but I don't want to do all that syncing
8
What are some good mining pools?
6
How much internet bandwidth does keeping a Ethereum wallet use?
1
How to estimate capex and opex
1
Specification of PC for being a miner

2
Connecting two nodes not on same network
3
What is the simplest and fastest way to mine Testnet Ether on a Windows Machine
0
Difficulties calculating mined ETH per month
5
How long will it be till ETH is not worth mining? (Ice Age)
1
Does network latency significantly affect mining rewards?
2
What happens to my blockchain download if there is a sudden ISP outage?
0
After mining (incomplete synchronized blockchain) and get 15 ether I loose everything
2
How will an Antminer F3 even work?
0
Clarification on Ethereum gas limit