I'm writing a very basic ERC20 token using solidity in the Mist wallet. For some reason the compiler doesn't like the totalSupply() function name. If I change this name it compiles fine.

To be ERC20 compliant, this function has to be signed this way.

How do I get around this error? 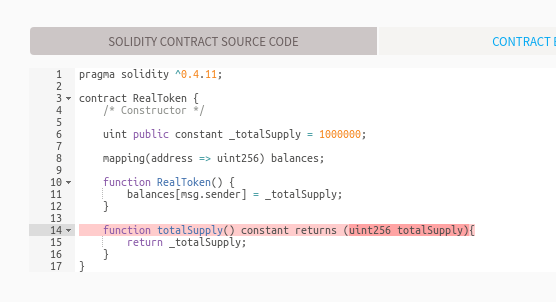 I think your function return argument should be renamed - this is what the compiler is really complaining about:

It's actually optional to name the return argument here; you can just put its type:

[For future reference, it would be easier to check if could post the code itself rather than an image of the code so we can cut and paste into the compiler.]

A typical fix and implementation of an ERC20 token is to rename the public variable to totalSupply (no underscore) and remove the function totalSupply as it would then be auto-generated by Solidity.

function totalSupply() constant returns (uint256 totalSupply) indicates to the compiler that the return value will be variable totalSupply (without underscore).

But the function is returning the value of another variable (looks the same but it's different since it has an underscore). So the compiler error is because the totalSupply variable is being overridden / shadowed by another variable.

As @benjaminion explained, do not name the return value and just use:

There is now no variable to shadow.

Not the answer you're looking for? Browse other questions tagged solidity contract-development erc-20 compilation compiler or ask your own question.

3
Structure with 16 elements
0
Why does the compiler keep asking me to declare internal functions?
0
Do I have to implement ERC20 signature as separate contract and use inheritance?
1
ERC20 totalSupply always returns 0
1
Solidity Compiler and EVM relationship
1
token deployment error with Web3.js