I'm trying to better understand how to implement smart contracts with tokens built on top of Ethereum. Before diving too deeply into the implementation details with Solidity, I'd like to understand possible roadblocks.

So, I've come up with an example of how I think that smart contracts could be used based on what I've read: Beervesting.

For my example, I came up with a new token: BeerCoins

Let's say these BeerCoins are created by mining, and breweries may want to purchase or mine them to create a beer futures market... maybe they want to sell their beer at a discount before they begin brewing it.

Here are a few types of transactions that I think could be done with these BeerCoins:

So, let's say that Alice is a savvy beer drinker, and she wants to buy her beer in advance for a discount using Ethereum. She can redeem her beer once it's been brewed (in 2 months).

Alice trades Ethereum for BeerCoins, and the BeerCoins now change state: They're redeemable for 1 pint of beer each.

Now, perhaps some time goes by, and Bob wants to get in on this BeerCoin action. He doesn't want to wait for the next batch; he'd like to buy some of the current batch. He's got a party coming up in the next few weeks, and good beer takes a couple of months to brew. Alice decides to give some (full) BeerCoins to Bob in exchange for some Bitcoins.

Now, Bob's ready to have his party, so he sends some of his BeerCoins back to the Brewery, and they ship him beer. The Brewery attaches a tracking number to transaction, and the BeerCoins are transferred and emptied as soon as the beer is delivered (as reported by an oracle, the shipping company). 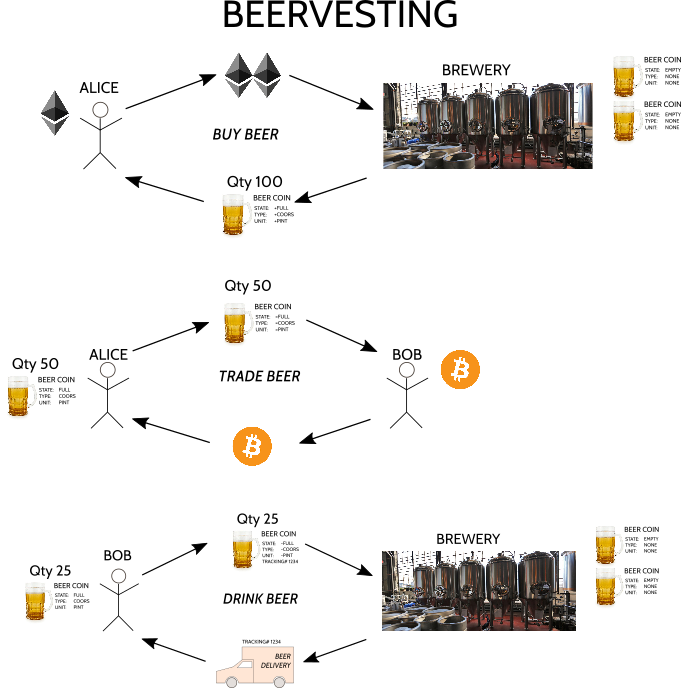 So my question is:

Is this smart contract implementation possible? Can Ethereum tokens carry a state in this way?

Are there any good examples for this kind of implementation?

I think there are a few things to consider:

Thanks in advance for the help.

It is not really feasible to give every token a state. The storage cost just would be too big -> You would need to give every single token a owner. It might work if you don't have that many token. (1000l beer each) But still a possible implementation would be something like this:

A better implementation for the scenerio you suggested would be something like this:

In my opinion it's totally in the ethereum context and can be done for sure.

Instead having a "state", Bob would just transfer to the let say last beer batch contract or x address on delivery! Then theses token burnt/destroy once all batch token back or x time reached.

Sorry for typos I'm on mobile and french :)

Note: from what I know oracle is consuming method.

1
Is there a specific procedure to deploy a smart contract/dapp to the public network (Mainnet)?
1
How to ensure the state of a smart contract is final?
2
Understanding the state transition function
0
How can one user(Patient) can share information to other user in solidity
1
How can a customer prove me that he owns a certain address and made a certain transaction?
0
How do I get data regarding the type of token moved as a result of a smart contract's internal execution?