How to connect Ethereum Wallet to geth node?

Disclosure: I am a complete noob to the cryptocurrency world and just started to try stuff since last night. My aim is to have an ethereum wallet to which I can transfer ETH from coinbase.

I have tried to download ethereum wallet .dmg file from GitHub release several times but the sync not progress after it reaches beyond a certain number of blocks. From reading stuff online, I understand that there is a fast option to sync. So I deleted the ethereum application and installer, installed geth using homebrew and then ran the following:

After a while I see this which keeps on adding a new block every couple of seconds. 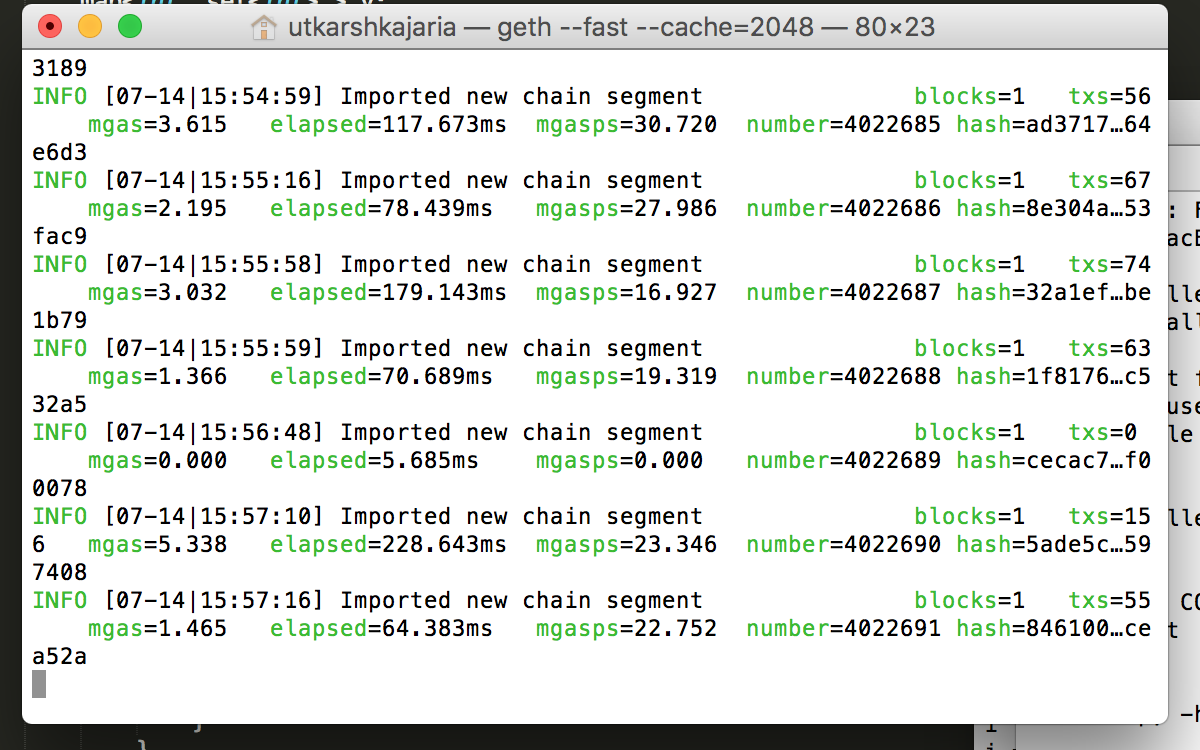 From the Wiki, I realize that this is "Normal Sync In Progress" that happens after "full sync transitioning to incremental single block updates".

My first question is: The above sync looks like a continuous process that is never going to stop since a new block will be created somewhere every couple of seconds. So should I just kill the process with ctrl+c? Why or why not?

Second question: The whole reason I did all of the above was to basically be able to use an ethereum wallet which was having trouble syncing out of the box via installer. Now that I have the synced blocks, How do I install a wallet and make it use these blocks instead of starting a new sync?

Thanks for your patience. Really appreciate your help.

Yes, your are now fully synced. You can kill the process if you do not need want to interact with the blockchain right now and want to turn off your computer/disconnect from the Internet/reduce RAM usage/etc. If you restart geth, it will start syncing from where you left off. If you want to help support the Ethereum network by providing a node that other people can sync their nodes from, then this is a reason to keep the process running.

You can install a wallet that connects to your geth instance. You will need to enable RPC (remote procedure calls) so that other programs can interact with your geth instance. This is done using the --rpc command line option. You should (read: do this or risk having your ether stolen!) ensure that only connections from via 127.x.x.x (usually 127.0.0.1) can connect to your geth to prevent malicious users from executing transactions. This is the default; only programs running on your computer can use your Ethereum accounts.

Make sure you trust your wallet. Mist can use your existing geth instance so you do not need to sync again. Just like you would treat your banking information, don't trust my links. And don't run random software on your computer that you don't trust.

Not the answer you're looking for? Browse other questions tagged go-ethereum ethereum-wallet-dapp or ask your own question.

7
How can I do a fast geth sync without consuming too much memory?
3
ethereum wallet slowing down entire system (ubuntu 14)
11
Syncing ethereum testnet
1
geth fast sync is not really fast on Mac
1
When Geth fast is sync, it starts over from 0
1
Can GETH or similar nodes download just the most recent blocks ethereum (without having synced anything prior to those blocks)?
1
My Ethereum Wallet/Mist Stuck after Byzantium update
1
wallet or node installed
1
Is it possible to artificially delete a given block from local chain database without causing any problems?