Use-Case: building a small test-network, did I got it right?

I've to implement a simple use case and I'm not really sure if I understood everything correctly.

What I'm trying to do is to build up a network with a few Raspberry-Pi's, running as full-nodes. Those nodes collect data, which are then saved in the blockchain. That data can be visualized by a DApp, which is running as a light-client, since it's only reading from the blockchain.

So everytime a node want's to save data, it issues a smart-contract, which gets executed by every node in the network. The miner starts mining a new block, which gets broadcastet after he solved the PoW (in my case I only have one miner).

The GUI can read the data from the ledger.

Did I understood everything correctly so far? The next question is, when I read data from the ledger, I connect to a random node in the network, which then reads the data from their local blockchain? In my diagram the ledger is shown as an single "entity", but in reality it is distributed in the network? 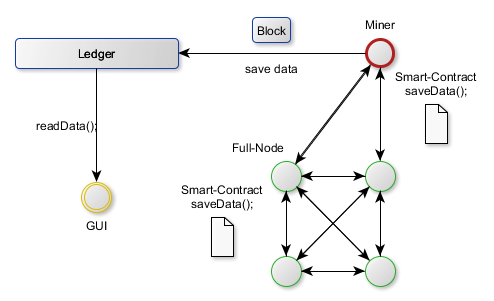 Any help is highly appreciated - also forgive my poor diagram :), I've a better one, but I can't post it here.

PS: I'm trying to run it with a private blockchain.

Browse other questions tagged blockchain contract-design or ask your own question.

9
Accessing off-chain data from a smart contract to make a decision
3
I want to clear out my idea of mining. Could someone verify and add missing concepts?
3
What is the order of operations to verify a transaction?
0
How to nodes maintain when its storage is less then the blockchain ethereum network data.?
0
smart contract in private Ethereum network
2
Smart Contract storage
1
basic ethereum setup help
1
smart contract and private blockchain