How many nodes are there on the Ethereum network?

When looking on the Ethereum Network Status site, only a limited number of nodes are listed. How can I discover how many nodes there are currently running in total?

There is a node explorer available at ethernodes.org which tries to estimate the number of nodes on the Ethereum network.

The estimation is based on an active crawling process that recursively connects to a node and asks for its known peers. As this approach only reaches nodes that are accessible from the outside a second, passive approach is used to reach nodes behind a NAT.

There are two tools which track running ether nodes available:

Update. As of this morning (July 31, 2017), there were 21,349 nodes, according to Ethernodes. The Etherchain Node scanner which 5chdn listed as the other nodes tracker in his Feb. 2016 answer (https://etherchain.org/nodes) no longer seems to work. Etherchain's "Node Explorer" (in the Tools menu) now redirects to Ethernodes.org.

If you would like to see images worth a 1000 words (or numbers!), you might like to look at a recent visual representation of the spread of Ethereum nodes around the world.

On Tuesday, July 18, 2017, Peter Szilagyi, who is part of ethereum's development community, tweeted Google Earth images showing the global spread of ethereum nodes in the network.

How did he do that?

By converting the computer Internet Protocol addresses from ethernodes.org into geographic locations and plotting them on Google Earth. He added that the ethernodes project may not include every single node, but the data is "the best we currently have." 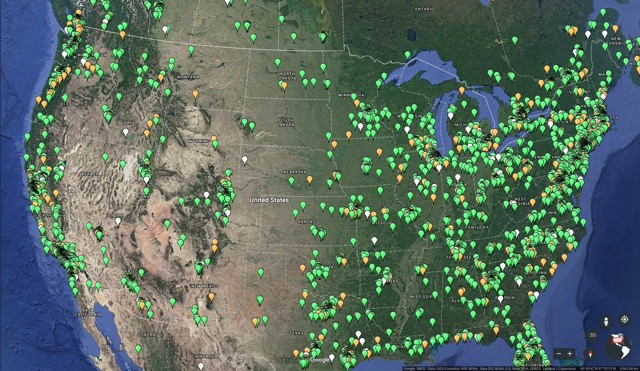 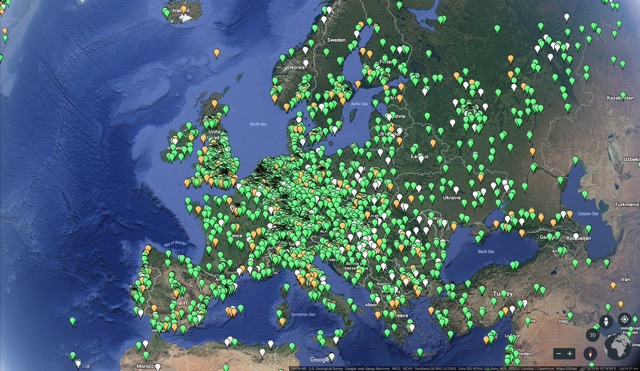 In his tweet, Péter Szilágyi‏ explained the colors on this map: (green = @golang geth, orange = @rustlang parity, white = everything else).

For more details, see this article: Ethereum is taking over the digital currency world which includes maps and a video.

Not the answer you're looking for? Browse other questions tagged nodes network ethernodes or ask your own question.

7
How to add a node to the Ethereum Network Status page?
2
What is the Ethereum network architecture? What are the major components of this?
23
What are the types of nodes in Ethereum?
13
At any given time, how many nodes is my node connected to? As the number of nodes in the network increases, will communication between them be faster?
1
How could i add a peer in a running network of ethereum private network without stopping network and sync it with network also?
2
How many nodes are supporting Ethereum Classic?