I have advanced in my research. The UTC/JSON file in question is a 491 byte file.

Considering this, my only chance resides in retrieving the actual file through file recovery programs.

At this point I am desperate and I need your help. I am quite new to ETH, I got very interested and I started mining two weeks ago with my personal computer and, seeing potential in the currency, I bought 1.0 ETH a few days ago. I will give a 0.1 ETH reward if someone has a solution for me.

UTC file was mistakenly deleted, I was able to recover it, but now Mist, Ethereum Wallet, geth and MyEtherWallet don't recognise the file as a valid wallet file. Might be corrupted after recovery.

Yesterday I was running geth to update the blockchain. I wanted to access the %APPDATA%\Roaming\Ethereum folder to see the actual size of the blockchain.

But Windows gave me an error saying that the folder was not in this location.

I found that strange, restarted my computer, nothing changed. I figured the folder got corrupted, so I carefully noted my ETH address and deleted the "%APPDATA%\Roaming\Ethereum" folder to download the whole blockchain again.

I did NOT know that the UTC-2017-xx-xx-xxxxx file was my actual wallet and did NOT back it up.

I thought with the address and the password I would be in the clear.

Then I wondered why my wallet didn't show up on Mist, so I looked it up and realized I deleted my UTC/json file which was in the "%APPDATA%\Roaming\Ethereum\keystore" folder.

I downloaded a few file recovery programs, ran them and got my UTC/json file back. Recuva said it was not overwritten and that its quality was "Excellent".

So I sighed in relief and put the file back in the new "%APPDATA%\Roaming\Ethereum" folder.

I opened Mist: nothing. I opened Ethereum Wallet: it showed up!... and disappeared a second after. I opened geth and ran "geth account list" and it did not show up.

It made me depressed at this point. Then I saw someone on a forum suggest MyEtherWallet for a different problem but I figured it could work.

So now I'm screwed, big time. I don't know what else to do. I will take any of your suggestions.

For now I saw that the UTC/json file weighs 491 bytes. It's not heavy. Could I specifically manipulate it and "bruteforce" it into a valid wallet file with trial-and-error?

Thank you for your time.

All you need to do is import the JSON file using mist. Open mist, press Ctrl I and drop your wallet json file into the resulting dialog. 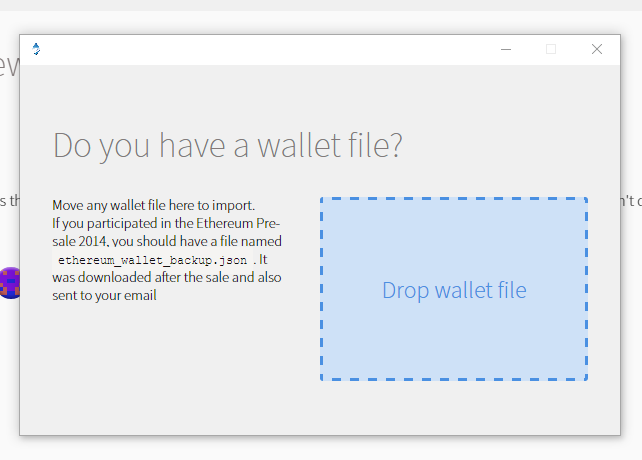 Not the answer you're looking for? Browse other questions tagged go-ethereum wallets json-rpc private-key keystore or ask your own question.

3
Ethereum private keys
5
is it possible I imported my wallet “Keystore” file and somehow the password files not included?
1
Transferring ETH from Contract to simple wallet *without MIST and synced blockchain*
0
Is it possible to extract private key from json/UTC file?
1
Not able to unlock account using GETH on testnet