Fallback function is not getting called

I have defined a fallback function to accept ethers, so that anybody can send ether's simply with send. But this is not working, if anybody send ether's to my contract, Transaction goes successful but account balance remains same, no deduction of gas fee. So contract does not receive any ether's. Code of fallback Function:

while trying to debug this issue, I have made sure that there is only one fallback function, I also increased gas. I have also checked there are no pendingTransactions. In transaction data field is also nil. How can I solve this issue? why fallback is not accessible?
Network:
Private network, geth v 1.6

There are several possible explanations. It's not possible to be certain because the rest of the contract isn't posted.

The commented lines (below) could be suspect.

I'm not certain this is on point, but it might be helpful in this case. In most languages, one can record messages during debugging and the log will indicate things that happened before a crash. In Ethereum, if anything should cause the execution to throw then the state will revert to the pre-transaction state (with gas destroyed).

The effect of an error is that Ether is returned and no events are emitted, as if the transaction never happened. It may be helpful to think of transactions as either 100% successful or 100% failed. We don't get events to help understand failures. That would be a semi-successful transaction which is not allowed.

In practice, this means we can't add events to a problematic function to gain insight into what's going wrong. If something goes wrong at any stage, it means no event will be emitted regardless of the order of steps in the function. It also means we shouldn't assume failure happened early merely because event emission came first. The error might occur further on in processing, but since errors cancel events, we don't get a hint about the step that caused the error.

Below seems to work. 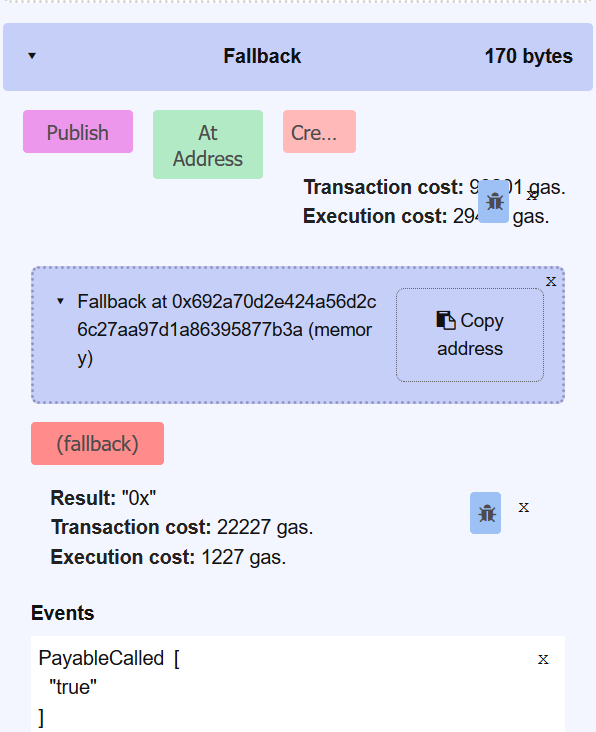 The file you linked that you said the payable is failing on, https://gist.github.com/furusiyya/92c411824bf3ece02d6c80dad265353b has no fallback function in the code. I'm assuming your adding the code you showed in your post here to it, but just want to make sure -- if not, then that is clearly why.

The next thing I would consider is are the funds being sent to the contract from another contract, including a contract wallet, if its utilizing .send() then it will be rejected if the fallback function has anything more than an event long.

Not the answer you're looking for? Browse other questions tagged solidity go-ethereum or ask your own question.

9
Send ether to contract address in web3.js
5
fallback function msg.sender error;
3
fallback function is accepting more than 2300 gas
0
A function declared payable is throwing a VMerror:revert in Remix
1
Is it possible for smart contract to link received tokens to the senders
2
Refund function in solidity smart contract not working
3
ERC223 Token Fallback Function Usage
0
Transfer function not working in basic deposit and withdraw contract
1
What is the best option to return the eth to the sender?