I am reading the paper: CLUE: Towards Discovering Locked Cryptocurrencies in Ethereum, available at: https://www.researchgate.net/publication/346425189_CLUE_Towards_Discovering_Locked_Cryptocurrencies_in_Ethereum It says that:

Is it possible to get a fake contract address? Is the above text correct?

Maybe the word "fake" was not the correct one to use in that scenario.

Let's take a look at this way of deploying a contract from another contract taken from solidity-by-example:

Take special attention to the block of code:

It's checking if the contract was deployed properly, by checking the contract code size with extcodesize (check the list of opcodes here).

If this check was not there and for some reason, the contract did not deploy correctly, we will have an address, but there's no code related to it.

If you call the getPredictedContractAddress() function, you will get the address of the contract that deploy() or deployWithAssembly() would create and return. So, if we call getPredictedContractAddress() before deploying the contract, and we check the returned address in etherscan, it will look like a regular, valid address. We can send eth to it. But we don't have a private key for it, it's just a valid address format but it does not belong to anyone, and it's not a contract. If we send eth to that address, we will not be able to deploy the contract to that address and we will lose the eth. 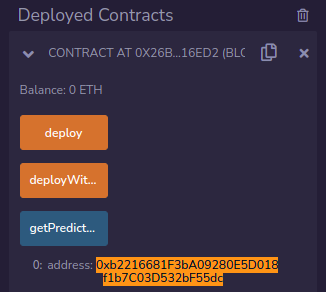 I sent some test eth to it. And then, I call the deploy() function, and it assigned the 'derived' address to the state variable so I can see it: 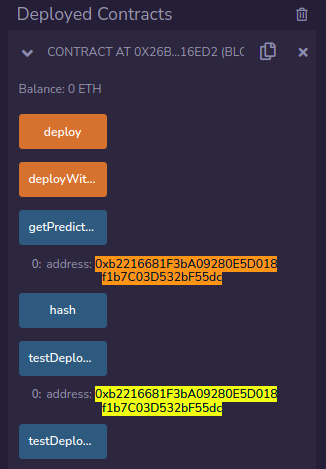 So, now what I thought was the future address of my contract now it's just a regular EOA, and since I already sent eth to it before deploying the contract, I'm not able to recover those eth, they are lost.

So, this is one of the things we need to be careful with while deploying contracts.

13
Is an Account in MetaMask the same as an Ethereum Account (EOA)?
2
How can I generate EOA address on testnet using JavaScript without access to ETH node?
1
Why contract accounts can only be activated by an Externally Owned Account (EOA)?
2
Gas cost for Ether transfer to Smart Contract from EOA
2
transfer of ERC721 between EOA to contract
2
Is "tx.origin" always an externally owned account (EOA)?
1
Function: null(address) in contract deployment
0
How to determine whether an address is an EOA or a contract address?