People who code: we want your input. Take the Survey

What are the parameters required to deploy the Ballot contract given in the solidity manual http://solidity.readthedocs.io/en/develop/solidity-by-example.html?

When I deploy new contract using Ethereum Wallet it asks me to enter constructor parameters as below: 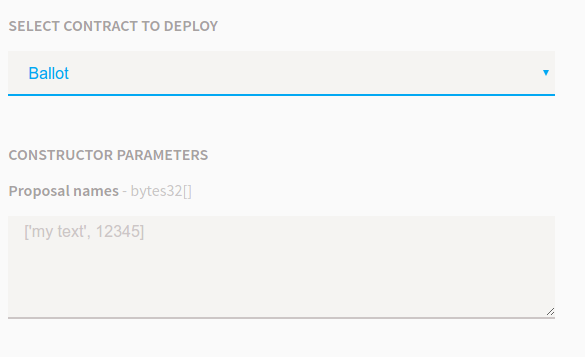 I have tried option ['ballot1', 111] and the contract is successfully deployed. But when I check the contract info with 111 its not showing up any info of that proposal

I'm not understanding what parameters to be given and how to check the working of Ballot contract.

This perhaps isn't the best example to start with. The very first line on the page you link to says this:

The following contract is quite complex, but showcases a lot of Solidity’s features.

When the contract is created/deployed, its constructor function is called. (The function with the same name as the contract.)

This takes an array of bytes32, called proposalNames, as an argument.

If you look at what the function is doing, it loops through the array of names and adds each one to an array of objects. Note that it sets the vote count of each to 0. All subsequent operations - setting and getting - will access these objects.

Using your example, I deployed the contract using "ballot1", 111 as the proposal names. (Having a number as a proposal name is a bit confusing, but it should still work.)

I then voted numerous times using the vote() function by passing the proposal number (either 0 or 1).

Calling proposals() and passing 0 or 1 allows you to check the current number of votes for that proposal. You can't use the proposal name to query this (at least in this contract).

And finally, calling winningProposal() returns the number of the proposal that has the most votes.

If you're just starting off, you might find using Browser Solidity easier.

20
How to estimate gas at contract creation/deployment to private ethereum blockchain
0
Deploying contracts in truffle while passing parameters of it constructor results in an error
0
cannot pass any parameters to solidity contract on create button in remix
0
What are the options for deploying a contract?
6
Providing base contracts' constructor arguments
1
Parameters for making an ERC20 contract with 1 token (w/ OpenZeppelin)
0
how to send parameters to smart contract while deploying using metamask
2
How do I set the constructor arguments when deploying using OpenZeppelin CLI?