Is a contract 'kinda' equivalent to a table or a row in a traditional database?

Following the analogy that a blockchain is a kind of database, I'm trying to understand how my data should be structured and stored on the blockchain.

I've read about writing contracts in solidity and I see that contracts can contain complex data types such as mappings, arrays and struts, etc.

Should I store database type table data, inside one of these inside a contract, or should I create many contracts of the same type and store a row of data in each?

Perhaps an example will help explain, say I want to store relationships between user accounts, would I create a 'table' contract as follows:

or a 'row' contract:

It would be helpful to know the pros and cons of both approaches, or others, including cost implications.

Basically my question is where should table data be stored?

Solidity gives us structs, arrays, mappings and event logs but nothing that closely resembles database tables. We have to devise feature-complete implementations at a lower level than we might be accustomed to.

There's no right answer for every situation. I can describe some use cases.

A row contract would create each instance as a little object-like entity with accessor methods. This is probably the most gas-expensive. This sort of factory pattern has use-cases; whenever there's a reason to create many copies of a base contract, such as a token factory. In practice, I find that I usually want to keep a list of the contracts created.

A table contract using mappings allows random access to structs when the keys are known but fails to enumerate keys when they're not known, or count them.

Event emitters can inform clients about state changes. These can include searchable indexes, and can be informative to clients. Sometimes solves the problem of client not having an obvious way to know the valid keys.

I've found it to be quite common to need it all. Random access when the keys are known, but also a way to browse the keys when they're not known. To accomplish that, you can have a mapping to structs in combination with an array of keys. 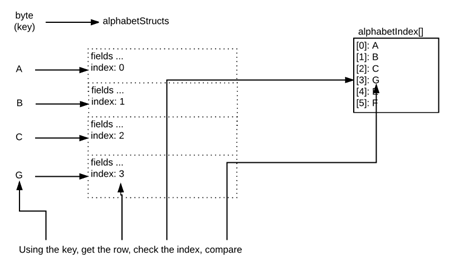 Not the answer you're looking for? Browse other questions tagged solidity contract-development blockchain contract-design or ask your own question.

5
How to use blockchain as a Database?
4
How are funds stored inside a contract?
2
How to store small database, editable data on blockchain accessible by smart contract?
1
System for paid retrieval of (secret) information possible?
2
Document verification Smart Contract (Ethereum)
1
Ethereum Enterprise Blockchain
0
How to access data stored in Ethereum Blockchain using Smart contract?
0
Contract Polymorphism based on address type cast issue
0
I can't compile my solidity contract, can someone help correct the code. i've been trying for about 24 hours now