TLDR: I tried to convert $500 USD worth of Eth (~0.181 eth) to an ERC20 token and only received $3 worth of the token. I should have received almost 3 million tokens but I only received 20,000. I looked at the internal transactions under the hash and noticed that when the ether was being wrapped, the quantity went from 0.181 eth to 0.0183 eth. Fees were about $50 USD and was separate from this so its not due to fees. I also don't think slippage would be 0.16 ether, so not sure whats going on...

I should have received 3.7 million 3X Short Bitcoin but I only received 20,638

Saturday night, I tried to use Coinbase Wallet to convert 0.181 Ether (almost $500 before fees) into an ERC20 token. I noticed one of the internal transactions listed Zero Proxy as the DEX, so I hope I'm in the right place.

The conversion took 5 mins or so to complete. However, I didn't see $500 worth of the ERC20 in my account. I should have received almost 3 million ERC20 tokens but I only received 20,000 tokens, based on the conversion rate at the time.

I reached out to Coinbase to understand what was going on and they mentioned that ERC20 transactions are considered Internal Transactions. I understand Coinbase Wallet doesn't run full Ethereum nodes, so internal transactions are not shown in your wallet’s Ethereum or ERC-20 token transaction history. But if that is the case, why are some of the ERC20 tokens showing up and not all of it?

And even if Coinbase Wallet doesn't show ERC20 transactions, shouldn't I see the tokens in the Metamask Wallet that is tied to my Coinbase Wallet? I don't see it there either.

I also took a look at the internal transactions tied to the hash. I can see that under the Call_0 trace address, the amount of Ether in this line is 0.0183 Ether, while the Ether tied to all the other trace addresses is 0.181. I wonder if this is the source of the problem? Why would the quantity (not value) of Ether drop during the conversion? I know that slippage is a thing but it shouldn't be to this degree. Altogether I needed to convert $500 in USD from Ether to the ERC20 token and the fees tied to that were almost $50 USD. So altogether, the transaction involved ~0.21 Ether.

Could anyone provide any thoughts or suggestions? I currently have 3 cases open with Coinbase Wallet but they have stopped responding to my emails. The Coinbase phone support team has been trying their best to help me but they always end up having to direct me to the Wallet team.

0xAPI can find liquidity in various places and it shows the amount you receive in return.

This doesn't imply that the token has decent liquidity. It appears that this 3x Short Bitcoin (BEAR) token is only liquid on centralized exchanges (Bittrex, FTX, Poloniex). There is almost no liquidity on-chain for this token.

Since this token is so illiquid on-chain, the best price for 0.181 ETH is ~20,000 BEAR. This token is only liquid and active on the aforementioned centralized exchanges.

As an example, here is how Matcha displays this illiquid trade. 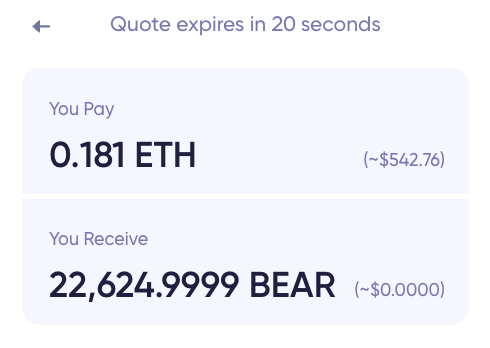 The 0.0183 ETH you mentioned is Coinbase Wallet's fee which is taken from the total sell amount.

Not the answer you're looking for? Browse other questions tagged erc-20 ether 0x coinbase or ask your own question.

0
Missing Ether from Bitstamp to Jaxx Wallet
4
Wallet for ERC-20 Tokens
2
What makes the value of custom/created erc20 tokens go up and down?
0
Receive ERC20 tokens on ethereum, for example, Parity wallet
1
Transaction Failed but showing as Pending on Etherscan
1
Why is it so much cheaper to buy/sell/convert on CoinBase than Coinbase Wallet or Uniswap?
0
Trade resulting in incorrect ratio for value traded out-of and into
0
Why is the price of my token wrong on Ox Protocol than everywhere else?