i'm pretty new to this topic but like to learn how things are working. I got some general questions to the different miner-settings available. First of all i know about pool-mining and how to set it up for different pools and i also know about the fact that solo mining is not worth but as i said i like the technical things and try to set different things up to make it work. I'am using geth. Got it full synced and added the "--mine" command to enable the ability to mine. Complete command :

This works fine i guess because when i attach to the node i get a "sync=false"-state which occured when the currentblock hitted the highest block. Complete Command:

If i gonna proof my Accounts with the following command i got my Adress which is totaly fine:

Proofed my balance with the following command which returns 0 which is also fine:

I would say that the node is running good this way.

There are a lot of incomming mining work-jobs as you can see on the following screenshot:

I started a mining-tool called "etherminer" with the following command:

This workes good as i think. I mean the mining-tool stays synced with all the jobs incomming from geth. I proofed it by comparing the sealhash. Following Screenshot of the working etherminer (from another timestamp so hash-values are not matching)

I was thinking about using the t-rex miner but i'am not sure about the "correct" command. The command i tryed looked like it's working as well but it get's waaaaaaay less jobs then the etherminer. I started the t-rex miner with the following command: 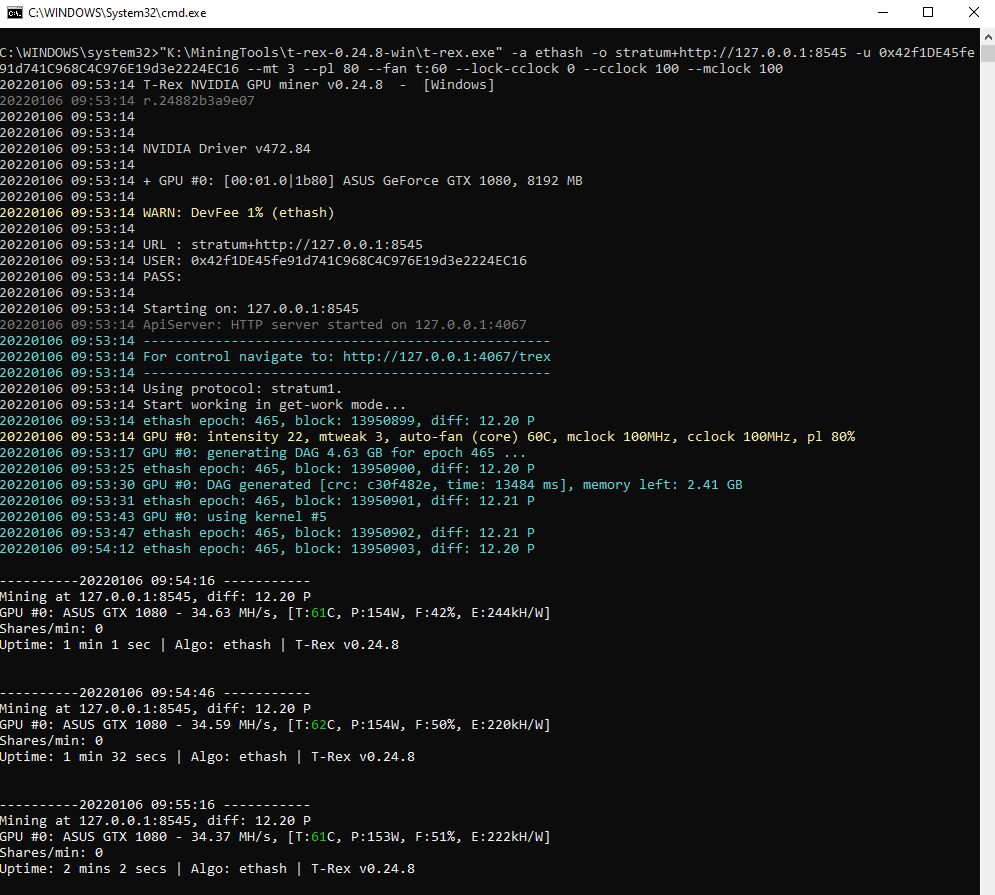 Hopefully there are some people to help me:) I just like technical things and just want to make it work, understanding things. Any help even to understand the whole things more and more would be awesome!

Which algorithm to choose

Will be thankful and welcome for corrections

3
Private chain, two geth miner on the same machine, second miner throws "panic: ethash_full_new IO or memory error"
3
Geth node not mining anymore since synced to new Ropsten testnet
0
Am I mining? Which part of log has to do with it? (Geth)
1
Is geth --rpc --support-dao-fork still valid
2
CPU mining on testnet using geth on ubuntu - eth.hashrate = 0