Last call to make your voice heard! Our 2022 Developer Survey closes in less than a week. Take survey.

How to interact with Ethernaut contracts via Remix

I'm going through the Ethernaut levels and I have some fundamental questions I need answered before I can continue. This question is particularly in reference to the levels that require you to deploy a contract to complete the level.

I'm confused about topics related to interfaces and abstract contracts. It seems that different solutions for said levels, like CoinFlip and Telephone, utilize different ways of referencing the contracts, some of which even involve copying the contract code and deploying it again via Remix. I know i'm asking kind of a vague question but if anyone has anything they think will help in my understanding, please share. Thank you.

I'm sharing a code snippet that follows the suggestion made below. The error i'm getting in Remix is [Member "changeOwner" not found or not visible after argument-depending lookup in address]. I get that the function wouldn't be able to be called because I haven't deployed the contract and passed through the contract instance that would reference where changeOwner lives. What is the work around? Thanks.

The Ethernaut challenges take place on the Rinkeby test network.

Are there multiple ways to interact with an already deployed contract?

Yes, you can basically interact with the contract from the blockchain itself (through your own smart contract) or by direct tx / calls through web3. Even though you could argue that to interact with your own contract you'd also need web3 or an equivalent library.

How do I reference that specifically?

For Remix, it's as easy as having your metamask running on Rinkeby and select "Injected Web3" for the Remix environment. 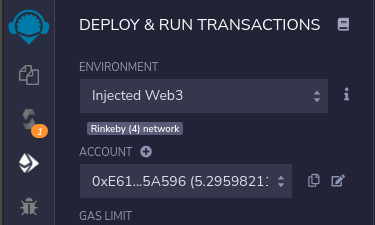 Then it's up to you to decide if you want a handle on the Ethernaut contract instance, or if you are just building a contract to interact with it.

For example, on most instances the following was enough for me :

Where you deploy your attack contract by giving the challenge contract address as a constructor parameter. This can be done easily on Remix on the deploy input field :

It seems that different solutions for said levels, like CoinFlip and Telephone, utilize different ways of referencing the contracts, some of which even involve copying the contract code and deploying it again via Remix.

For now I never had a need to redeploy the contract instance from Remix as you say.. But anyway every challenge is different and it's up to you to figure out the vulnerability and the way to exploit it.

For your example, in order to use this syntax:

If you prefer a more succinct syntax, you can use calls with abi.encodeWithSignature that don't require to define the target contract, just to know (part of) its abi :

Not the answer you're looking for? Browse other questions tagged contract-invocation interfaces abstract or ask your own question.