Gas not enough and not able to run functions

I am a new comer to the Ethereum and I am writing a piece of smart contract for my project. I used Win 10 and Mist 0.8.8 with the testnet that started with "R".

The contract code has the functions of changing the state and some modifier, however, after I launched the contract, I am not able to run any functions of it. The following errors show up. Thank you so much!!! 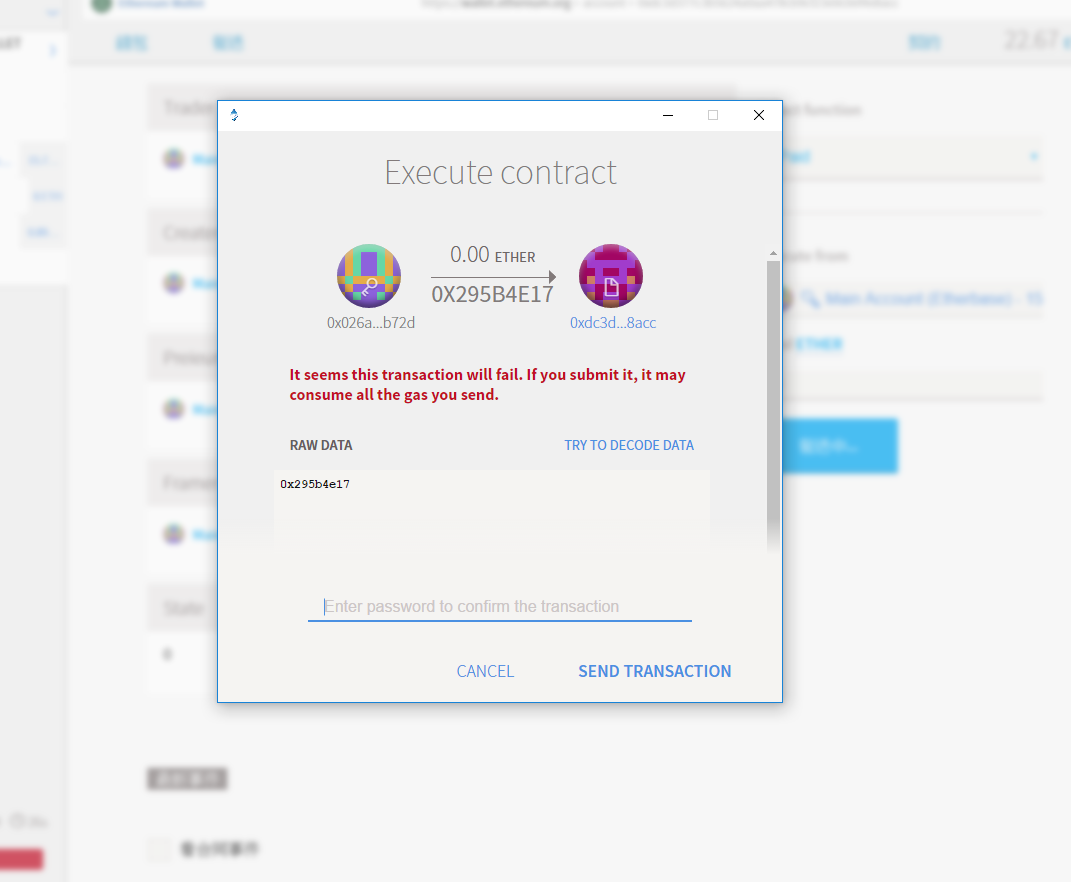 The contract code is show below: Thank you so much!

The Testnet has the name Ropsten.

From the raw data 0x295b4e17 in your first image, you are trying to execute the paid() function.

I checked each of the function signatures in the geth command line and the following signature matched:

This paid() function has the modifier inState(State.Received) and this modifier will throw an error is the current state variable is NOT State.Received.

The warning you are being show is because Mist simulates the call you are attempting to execute and has determined that the call the paid() will fail as the current state variable is not set to State.Received.

To test out your functionality, you could either:

Q: Should I use uint to be the type of variable to record ehter send?

A: uint (which is uint256) is suitable for recording the number of ethers.

Q: Finally, I would like to learn the cml to run the contract. Do you have some recommended link for me?

You may also want to check out Browser Solidity - see How to call Library Function from a Contract? => [error] The contract code couldn't be stored, please check your gas amount. undefined for an example.

Not the answer you're looking for? Browse other questions tagged mist gas contract-deployment gas-limit or ask your own question.

20
Deploying the Greeter contract via the geth CLI is not registering in my private blockchain
7
How to call Library Function from a Contract? => [error] The contract code couldn't be stored, please check your gas amount. undefined
4
Understanding TokenCreator/OwnedToken example from Solidity documentation
3
Unable to deposit ETH to simplest-possible contract
3
Smart Contract different behaviour on testnet vs Solidity Browser

4
Understanding TokenCreator/OwnedToken example from Solidity documentation
7
Token transfer: Intrinsic gas too low
7
How to get the cost (in gas) of the non-constant function call?
2
Constant functions and gas
0
Can a contract run out of gas?
0
Warnings ICO contracts : set a now time or a future date-time
1
Gas for view functions
3
Error Ganache: Run out of gas - Works in Remix/Not from dApp
0
remix ERC223: This contract does not implement all functions and thus cannot be created
0
Why are transaction fees defined by both gas price and gas limit, and not just one cost limit?