What is the form of a transaction once it is broadcasted in ethereum blockchain before being mined?

I understand that once a transaction is settled between two parties the transaction message’s structure is serialized using the Recursive Length Prefix (RLP) encoding scheme. Then it is broadcasted to nodes so that miners can mine the transaction.

My question: What is the form the miners receive to include the transaction in the block? Is it the signed tx or the RLP-encode of the signed tx?

I know that the Recursive Length Prefix (RLP) is used to encode a wide variety of data in Ethereum including transactions. But, I am not sure if this is used once the transactions are transmitted in the blockchain.

So in more concrete words, does the miner receives the signed signature $Sig$ as described in this equation:

or does the miner receives the $F_{keccak256}(m)$ or does it receives only m the RLP-encoded transaction which is not yet signed. I am really confused!

It is important to differentiate between tx and message (aka internal tx). Based on this link.

A transaction is a cryptographically signed message that specifies what change is to be made, and it is sent to any node in the network.

The message that makes up the transaction is an RLP-encoded array that specifies the details of the transaction such as recipient, value, data, gas limit, gas price, nonce, and signature.

The formula described above shows that $m$ is the RLP-encoded message that is transmitted through the nodes. This is still unclear and the book editor does not specify clearly whether the $m$ represents this.

However, based on researching and reading the Ethereum Yellow paper, one can say that this is not the message that is transmitted to the network as the signature needs to be included.

It seems that the transaction that is circulated between nodes for a miner to mine the contract is the RLP-encoded serialization of the transaction including the v,r, and s components.

In particular, this hash could be viewed here https://etherscan.io/txsPending 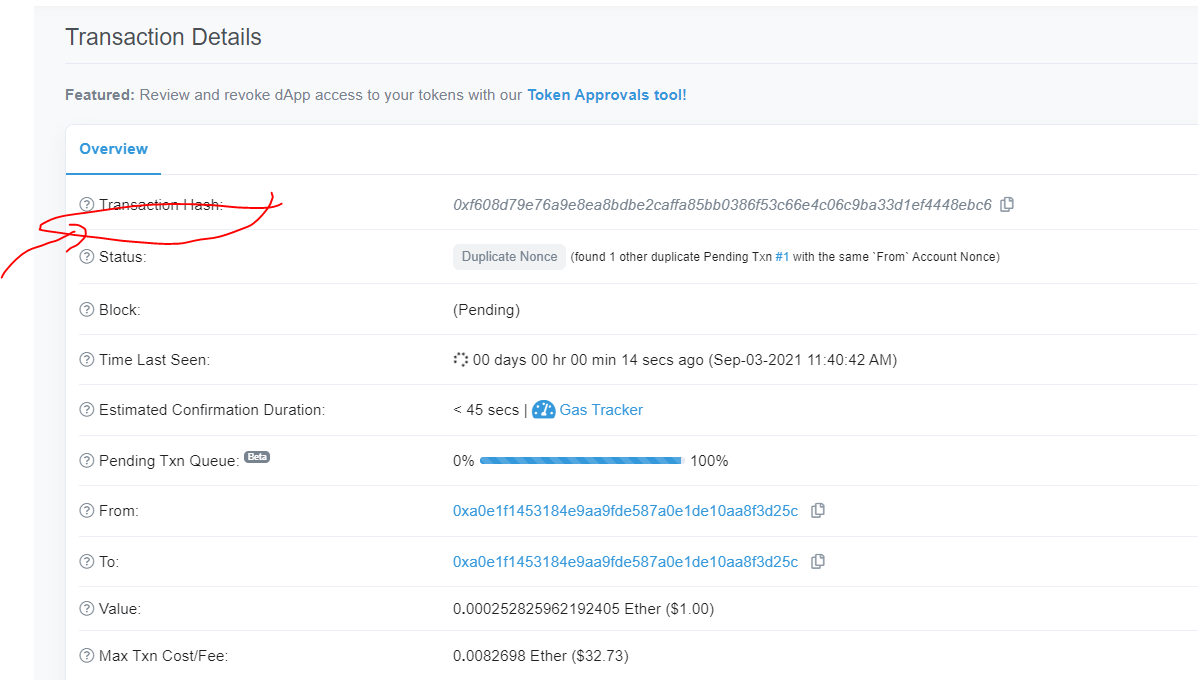 This pending tx is the decoded form of the RLP-encoded tx.

This "Transaction Hash" is the cryptographically signed message that is being transmitted throughout the nodes. I am not sure but most likely the Keecak256 hash of the RLP-encoded tx.

Not the answer you're looking for? Browse other questions tagged transactions signature or ask your own question.

4
Retrieve the signature of a transaction on the blockchain
1
Transaction not being mined on Ropsten
1
Simulate how a transaction will affect state before it is mined
1
Spending funds before the block is mined
4
How to create and send Flashbot transactions?
0
Are the tx signed then RLP encoded then hashed to be transmitted to the blockchain for miners to mine?